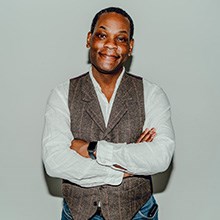 Dr Tom Attah is a practising musician, and Popular Music Performance Course Leader at Leeds Arts University. His Ph.D. in Popular Music was awarded by University of Salford. His research interests focus on the effects of technology on popular music and society, such as these relate to power, gender, media, history, race and discourse.

Tom’s academic writing includes international peer-review articles and book-reviews. Tom is currently co-editing a book for Routledge concerning the nature of narratives in popular music writing, and his chapter concerning the role of the north of England in the development of blues music is included in the edited volume ‘Sounds Northern: Popular Music Culture and Place in England’s North’ to be published by Equinox in 2018.

As a guitarist and singer, Tom performs solo, with an acoustic duo and as part of an electric band. Tom’s solo acoustic work includes his own original blues songs and has led to performances at major international music festivals. Tom’s music can be heard daily at Mayfair, London, where his compositions and recorded performances play in the former residence of Jimi Hendrix. Tom’s multiple national media appearances include performances and documentaries for the BBC and Sky Arts.

Attah, T. (2013) ‘Mythbusting #7: The blues is a traditional style unaffected by technology’, Blues in Britain Magazine.

Attah, T. (2013) ‘Mythbusting #6: Al Wilson had to re-teach Son House how to play the guitar’, Blues in Britain Magazine.

Attah, T. (2013) ‘Mythbusting #4: Was Muddy Waters really painting the ceiling at Chess records when he met the Rolling Stones?’, Blues in Britain Magazine, 134.

Attah, T. (2020) ‘To make purple, you need blue: Prince as embodiment of the postmodern blues aesthetic’. In: Prince and Popular Music Critical Perspectives on an Interdisciplinary Life. Bloomsbury Academic.

Attah, T. (2017) Halls without walls: perpetuation, development & dissemination of the discourse on blues music and blues culture in the digital age (1996-2016). PhD thesis. University of Salford.

Attah, T. Halls without walls: examining the development, dissemination and perpetuation of blues music and blues culture in the digital age, 53rd Annual Conference of the Royal Musical Society. University of Liverpool. 7-9 September 2017.

Attah, T. ‘Ain’t no grave can hold my body down’: exploring the persistence of mythology in blues music and blues culture, ‘Equal Platforms’ Research Conference. University of Gloucester. 4 April – 5 April 2017.

Attah, T. To make purple, you need blue: Prince and the modern blues aesthetic, Purple Reign: An interdisciplinary conference on the life and legacy of Prince. University of Salford. 24 May – 26 May 2017.

Attah, T. From the Delta to the Download: Influence and Effects of Technology in the Blues Innovation in Popular Music. Leeds College of Music. 2014.

Attah, T. Whose Blues?: Issues of Identity and Ownership in Contemporary Blues Music Culture and Performance, International Association for the Study of Popular Music (IASPM). University of Glasgow. 2013.

Attah, T. Feels Like Going Home: Mythologising the Story of the Blues, International Association for the Study of Popular Music (IASPM). University of Salford. 2012.