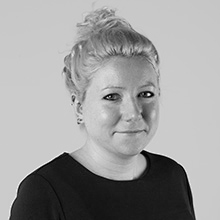 Rosemary is the Course Leader and creator of the BA (Hons) Comic & Concept Art degree. She is an illustrator and concept artist specialising in Creature Design. Before joining Leeds Arts University in December 2017 she was a Lecturer in Concept Art at Teesside University.

In 2020, Rosemary authored MA Creature Design, MA Graphic Novel, and MA Worldbuilding. She is now the Subject Specialist for MA Creature Design, the first of its kind, supporting students to create believable creatures that engage with their environment and have a past, present and future.

In 2017, Rosemary was one of 8 worldwide applicants selected to complete an online, cross-disciplinary and collaborative residency with SciArt Center, New York. Working with a Volcanologist to explore science communication through narrative and world-building Rosemary created speculative creatures based upon volcanic phenomena. This culminated in a presentation at the American Geophysical Union’s Fall Meeting in December 2017.

As a freelance artist, Rosemary has produced concept art and illustrations for games, animation and publishing. Most notably, she was a concept artist for Yamination Studios' short film "At-issue", a stop-motion animation screened on Sky Arts. She also has an ongoing partnership with Ecogon by Gaiagames — a table-top, strategic game with a focus on educating players in European Ecology — creating the artwork for various species cards for multiple editions and expansions.