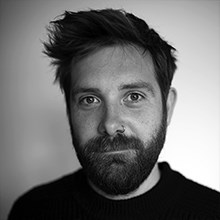 John is a practicing freelance comic book artist and illustrator alongside his teaching. He has built a reputation as an inimitable talent through his varied portfolio producing bespoke illustrations for clients as diverse as Arrow Video, WWE, Warner Bros., Netflix, The Ray Harryhausen Foundation, Nuclear Blast Records and Kendall Calling Festival amongst many others. He is also an award-shortlisted comic book artist, creating work for Image Comics, Titan Comics, Heavy Metal Magazine, Z2 Comics and self-publishing both print and web-based comic series. He has frequently exhibited in the UK and USA, organised extensive art experiences across the country, and produced live murals at high profile events both independently and as part of Leeds based art collectives.

His increasingly experimental approach to work fuses traditional drawing techniques, digital painting and collage to produce highly-detailed and darkly compelling images across a range of printed media. Combing elements of photorealism, popular culture, abstraction and psychedelia to create a unique style that aims to connect to a wide spectrum of audiences.

John has a BA (Hons) Fine Art from De Montfort University, as well as a PGCE from Manchester Metropolitan University.