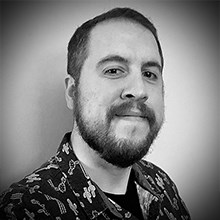 James Lawrence is a Lecturer on the BA (Hons) Comic & Concept Art Course.

He is an independent cartoonist and freelance illustrator, specialising in work for the all-ages and YA market. His area of practise and research focuses on the development of the unique visual vocabulary and narrative possibilities of comics as a universal language and educational tool. This is explored in his ongoing award-nominated series The Legend of La Mariposa, as well as his contributions to series such as Afterlife Inc and anthologies such as Knifepoint Horror and Strange Romance.