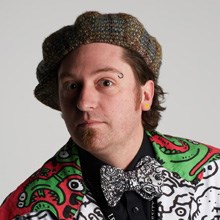 Ben Simpson a.k.a Doctor Simpo is a Senior Lecturer for the BA (Hons) Animation course and is also the Graphic Novel Subject Specialist for the newly formed MA Illustration and Graphic Novel course at Leeds Arts University. He regards himself as 'Sequential Narrative Specialist' in traditional 2D sequencing techniques with a rich grounding within the shorter comic book format and the longer comic form of the graphic novel, these skills he learnt from the cohort of creatives working out of Glasgow's Hope Street Studies of the early naughties; Dave Alexander, Graham P. Manley, Frank Quitely, Grant Morrison and Jamie Grant.