Josh graduated in Fine Art at Leeds Arts University in 2011, having worked on organic abstract forms initially inspired by the vines and trees he had seen in the Peruvian Amazon. His work started to deal with ideas surrounding spatial planes, harnessing negative space through the use of light, video and 3D form. 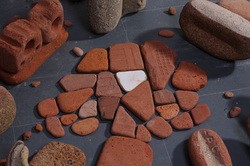 Back home in Norfolk following his graduation, Josh’s focus moved from the natural aesthetic to man-made aesthetics relating to construction - particularly brickwork and stonework. Josh collected loose bricks on the beach, grinding them into powder that he used as paint to form images on canvas. In 2012, he returned to Leeds where he continued to find new ways to use these bricks as well as found tiles and slates, eventually developing sculptural pieces from the practice.

This ongoing project titled Formation and Disassembly involves the relationships between the human cycles of construction, deconstruction, and reconstruction, as well as the way in which they collide and coalesce with nature. The central element to this is the course of those recurring, ready-made essentials which Josh found from washed away villages such as Eccles-Juxta-Mare on the ever-eroding East Anglian coast, and on the streets of windswept Leeds.

Leeds Arts University alumni are offered the opportunity to apply for studio space to develop their creative practice. Josh secured such a tenancy at Barkston House in 2014, and developed his work with the support of East Street Arts, where he re-established connections within the artistic community and collaborated on a range of projects.  After six months at Barkston House, Josh moved into Assembly House Studios in Armley where he continues to create work for exhibitions.