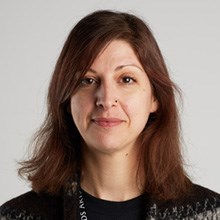 Dawn Woolley is a visual artist using photography, video, installation, performance, and sound. Woolley received a first-class degree in Fine Art Printmaking from Manchester Metropolitan University (2001). She completed an MA in Photography (2008) and PhD by project in Fine Art (2017) at the Royal College of Art. She uses photographs of objects and people to question issues of artificiality and idealisation. In her self-portrait work she creates photographic substitutes to examine the act of looking and being looked at. She positions herself as a female object to explore the power relations at play in exhibitionism and voyeurism. She views her still life work as portraits of a type, evoking unseen subjects who possess and consume the objects on display. Drawing on both definitions of the term 'consume' she produces food still life photography to represent different characters and positions in relation to advanced capitalist society.

Woolley's research centres on consumer culture and commodification in advanced capitalist societies. Referring to Marxism and psychoanalysis she explores the relationship between people and objects, and the impact that adverts have as disseminators of social values. Taking the term 'advert' quite loosely, she refers to Dutch still life paintings as adverts for the craft-objects they depict. The body of the consumer is also considered an advert because of the commodities it is adorned with and the socially prescribed ideals it could reinforce. The impact of social media network sites and the rise of the ubiquitous "selfie" is also considered. The practical outcomes of this research include multiple photographic series, two photography books, sound pieces and public interventions in commercial advertising spaces in cities and on social networking sites.

In 2017 Woolley began a collaborative project - Hard Stop - with American artist Davin Watne. Watne and Woolley produced a billboard and performance for RedBoard 2017 as part of Hull Capital of Culture 2017. They are working on a new performance and moving image work for Fighting Talk exhibition, SheFest, Sheffield 2018.

Woolley, D. (2020) The Dissecting Gaze: Fashioned Bodies on Social Networking Sites. In: M. Laign and J. Wilson, eds., Revisiting the Gaze: Feminism, Fashion and the Female Body. I B Tauris.

Group Exhibition. (2017) ‘The Substitute (holiday)’ in From Selfie to Self Expression. Saatchi Gallery, London. March – September 2017.

Woolley, D. ‘Selfies: Still Life or Nature Morte’, (Dis)Connected Forms: Narratives on the Fractured Self Conference. Wilberforce Institute for the study of Slavery and Emancipation, University of Hull. September 2016.