Wesley Perriman is a freelance Curator with a specialism in nuclear history. Amongst his curatorial work is ‘Over the Fence: to the other side of the world’ an exhibition exploring the untold stories of Britain’s nuclear test veterans at The Peace Museum, Bradford. He graduated from MA Curation Practices in 2019.

We caught up with Wesley to find out about his practice and the experience of studying the MA Curation Practices course as a part time student. 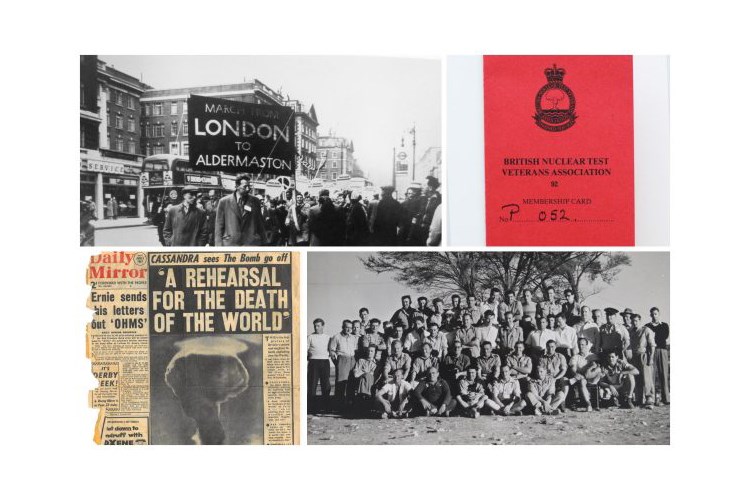 Image: ‘Over the Fence: to the other side of the world', The Peace Museum, Bradford.

Can you tell us about what you have most recently been working on?

In my first year of the MA I looked at historical interpretation in museums and then moved on to explore my nuclear heritage. My dad Jim Perriman was at Maralinga South Australia during the last part of Britain’s Nuclear Testing Program. Using his collection as a starting point I set out to establish the British Nuclear Test Collection. This culminated in the “Over the Fence… to the Other side of the world exhibition” at The Peace Museum, Bradford. The research behind the exhibition has seen me collaborating with people across the world in Australia as well as the UK.

During the exhibition I worked with co-curator Dr Becky Alexis-Martin from Manchester Metropolitan University. Dr Alexis-Martin is currently writing a paper for the Social History Curators Group which I have contributed to along with Stephanie Alexander who is an Archival Photographer. It was Stephanie who has helped tremendously to document the collections.

I am a member of the new War and Conflict Specialist Subject Network group organised by the Imperial War Museum and will be speaking about my work on nuclear test veteran’s at events in 2020.

How did you realise that curation was something that you might want to pursue?

Moving into curation has been a natural progression for me. I originally studied for a BA in Fine Art at Nottingham Trent University, my final piece was called The Tranzient Gallery and was a neo-Victorian curiosity cabinet built on the back of a tricycle. It was exhibited at the Circa Now show at Nottingham Trent University in 2006. After returning to Yorkshire I used the gallery as a market stall to sell local arts and crafts. It required a rebuild and, after a few years, the new Tranzient Gallery went on to be exhibited at Fallfest 2011, Transform at the Leeds Playhouse and the Halloween Happening at the Laurence Batley theatre.

In 2011 I was commissioned to build the Palace of Curiosities and both were exhibited at the six month Steampunk Exhibition at Bradford Industrial Museum. At the end of the exhibition the pieces went on tour and have been exhibited across the UK including the Ikon gallery, St George’s hall, and Showzam Blackpool Winter Gardens. I have continued building sideshow cabinets occasionally and currently I am helping prep for a summer season at the Heights of Abraham for the Palace of Curiosities.

I have always had a passion for historical interpretation, I’ve been involved with re-enactment for 20 years and have developed an authentic living history display interpreting medieval pewter casting. This requires extensive research into the period and subject matter. I design and hand carve stone moulds based on originals. Then hand cast pewter badges over charcoal brazier at events while at the same time giving talks to the public about history and process. In this hobby I also learnt to demonstrate medieval fighting using pole arms. I regularly take part in commemorative marches in full 15th century kit. In March 2016 I joined an archaeologist in walking from Skipton Castle to Towton Battlefield in light armour. The 50 mile route took 3 days but provided useful insight into the men who died at Towton.

‘Over the Fence: to the other side of the world’ opened at The Peace Museum, Bradford in October 2019.