Artist and Illustrator Janet Rawlins was born in 1931 in Horsforth in Leeds and studied for a National Diploma in Design (NDD) and Art Teacher Diploma (ATD) at Leeds College of Art (now Leeds Arts University) from 1947-1952.

Janet draws her inspiration from the Yorkshire Dales where she lives and works, she is known for her Dales landscapes in fabric collage and watercolour. A prolific artist, her illustrative work includes her instantly recognisable fabric collages reproduced as Waddingtons Jigsaw puzzles during the 1960s and 1970s, as well as several illustrated children’s books.

Throughout her 60 year career Janet also completed commissions for large scale-machine embroidered collages, including a large commission for the Leeds Permanent Building Society. From 1971 to 1982 Janet created 39 double sided collages, each individual with a local theme for each branch. Sadly all but the Malvern and Ripon Leeds Permanent Building Society collages are now believed lost. 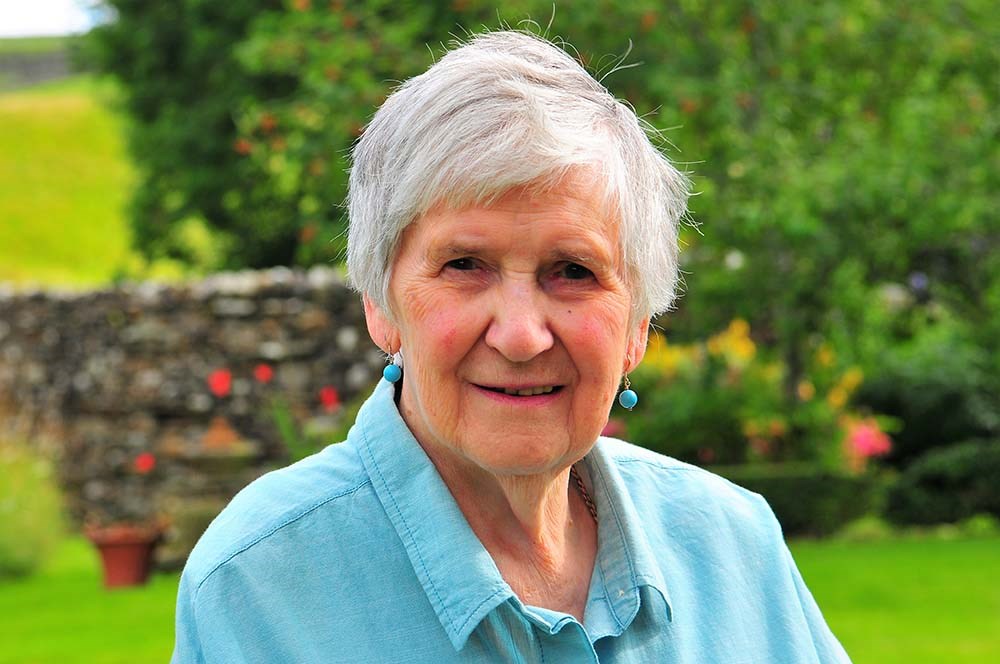 Image: Janet Rawlins in her garden in Bainbridge, 2019, photograph by Rob Marshall, courtesy of Janet Rawlins.

After teaching in Somerset and on the Isle of Wight from 1953-1955, with support from her parents and a little studio above the family paint works store in Leeds, Janet made the leap to try to make it as a freelance artist. It was here that she made her first fabric collage, Dragon, in 1956 and re-established her friendship with Architect, and fellow Leeds College of Art alumni, Derek Walker - Walker went on to become chief Architect of Milton Keynes and later designed the Royal Armouries in Leeds. Their long standing professional relationship resulted in an impressive output of work which included mosaic, collage, painting and other work in varying mediums. 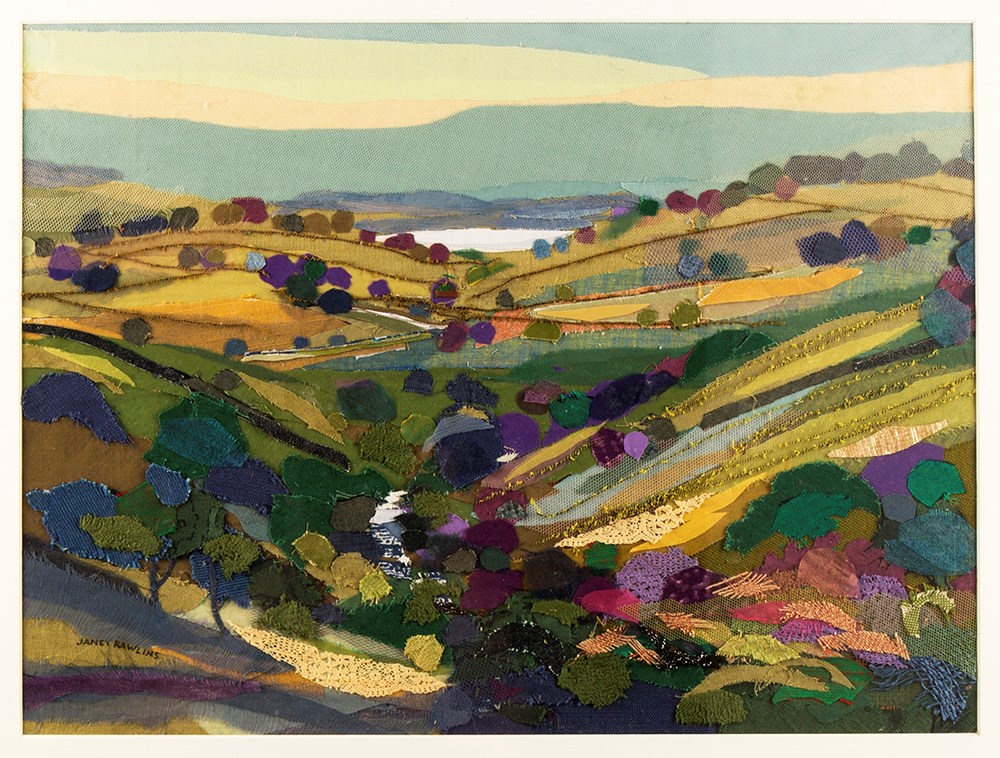 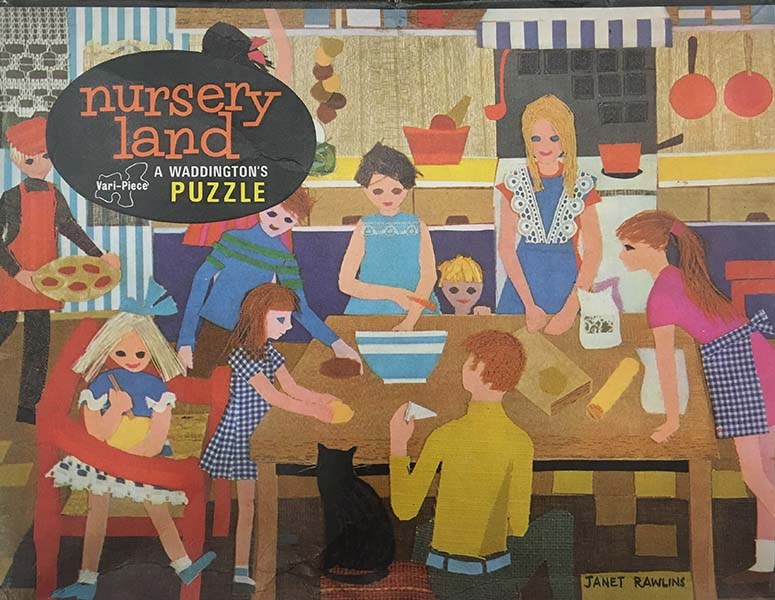 In 1952 Janet’s first solo exhibition opened in Batley Art Gallery, attended by her friend Jacob Kramer. Kramer’s study of Janet in chalk was made at the same time and has recently been gifted to the Mercer Art Gallery in Harrogate.

In 1958 Janet married Kenneth Parfitt, the couple spent their honeymoon in Bainbridge, Wensleydale an area that they would continue to return to, and in which Janet would settle. In 1970 the couple opened Bain studio, occupying the floor beneath Bainbridge Congregational Church, where they ran art classes and sold paintings, collages and Ken’s constructions. Unfortunately Kenneth died the following year and, with Janet unable to manage the commute from Leeds, the studio closed. 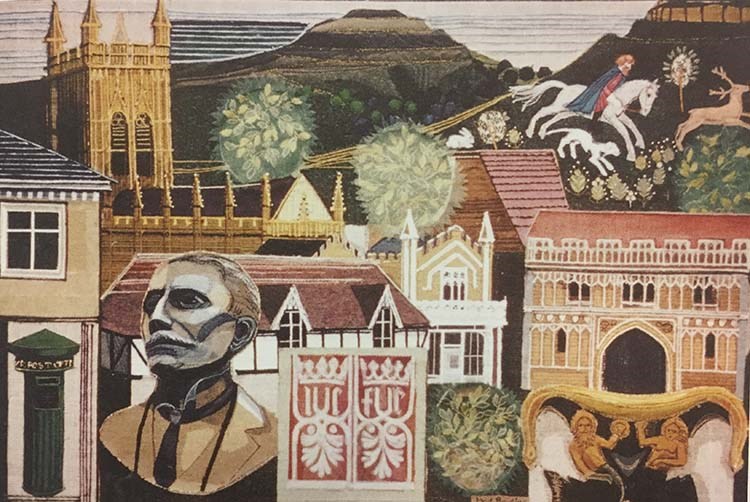 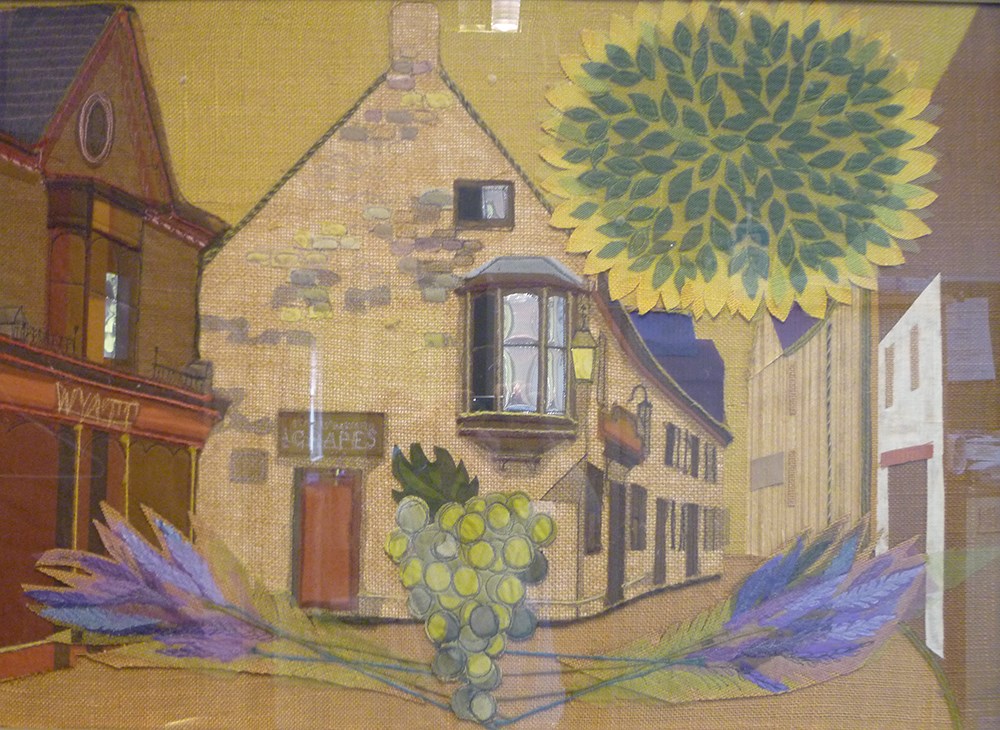 In 1976 Janet was able to move from Leeds to Bainbridge with her young son James and, with the help of an architect friend, Janet designed, built and moved into Unicorn House. In 1982, she married John G (Peter) Leyland and moved to his family home in Askrigg where they lived for twenty years until moving back to Unicorn House in 2002. Peter died aged 90 in 2010. 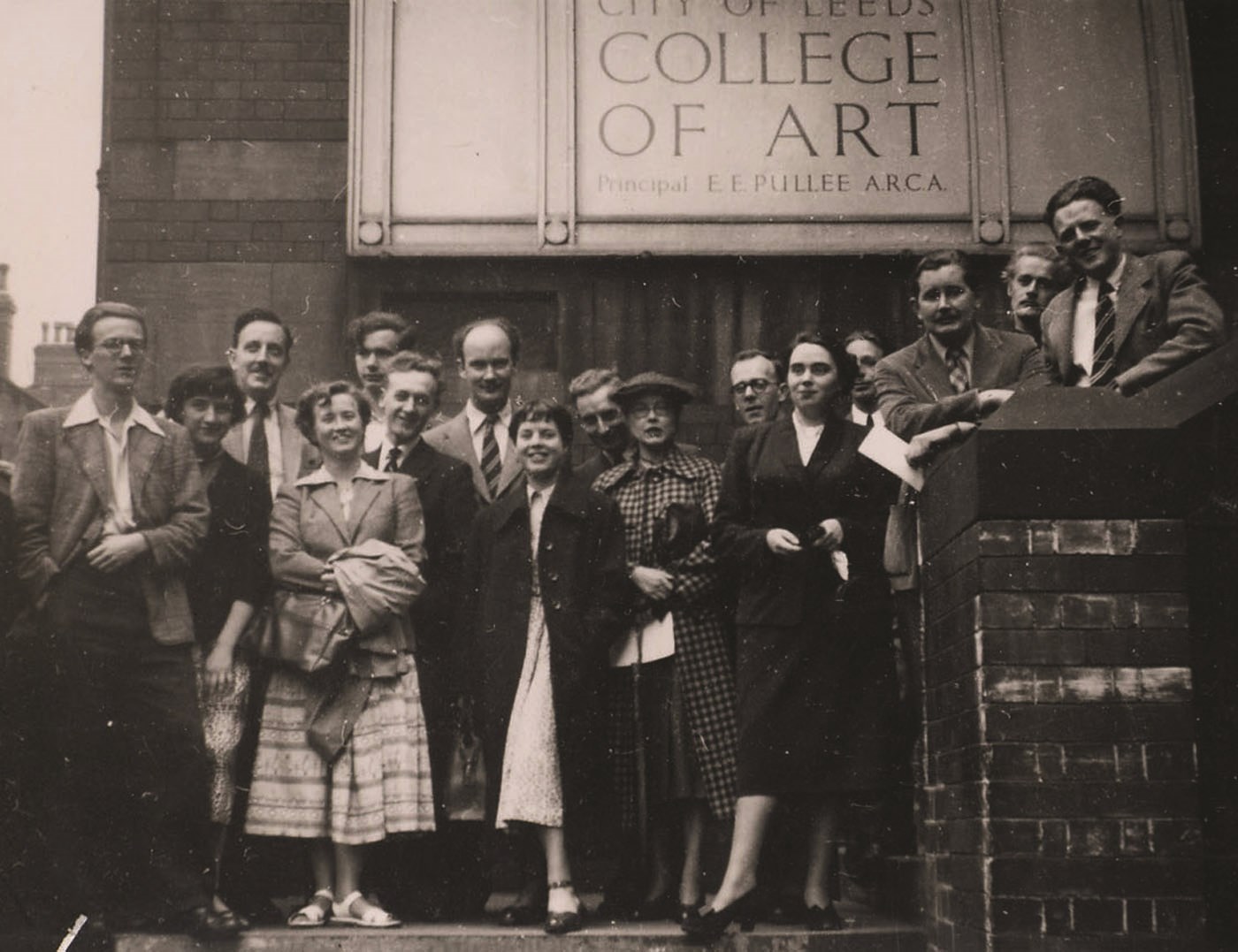 Image: The pedagogues on the steps, Vernon Street, 1952. Photograph courtesy of Janet Rawlins.

Janet's publications include A Dales Countryside Cookbook (1992), A Grass Rope to Catch a Unicorn: Wensleydale Wild Flowers and Other Illustrations (2014) and An 1844 Pennine Way from Tees to Ribble: Five botanists walk from Crook to Settle (2016). Her book illustrations include The Hollowland by Jane Gardam, which won the Whitbread award in 1981, Horse and Bridget and William by the same author. She has produced numerous drawings and cover paintings for The Dalesman Magazine.

Throughout the 1950’s Janet regularly exhibited at the Royal Academy. Recent exhibitions have included a 1991 solo exhibition at Fountains Hall, 1999 Retrospective “Fabric of the Dales” and a 2003 exhibition on the theme of Landscape and Legend both at The Dales Countryside Museum. In 2011 a solo exhibition ‘In Turners Footsteps’ was held at Aardvark, West Burton.

In 2019 Janet Rawlins kindly presented the University with a work by her late father and former student E.J.Rawlins as well as an etching, passed down to her by her father, by the then Principal of Leeds College of Art Principal Harold H Holden.

An exhibition on Janet Rawlins work Janet Rawlins: Life in the Dales was held at Leeds Arts University, Vernon Street Gallery in the building where Janet studied from 1947-1952 from 13 September - 1 November 2019. 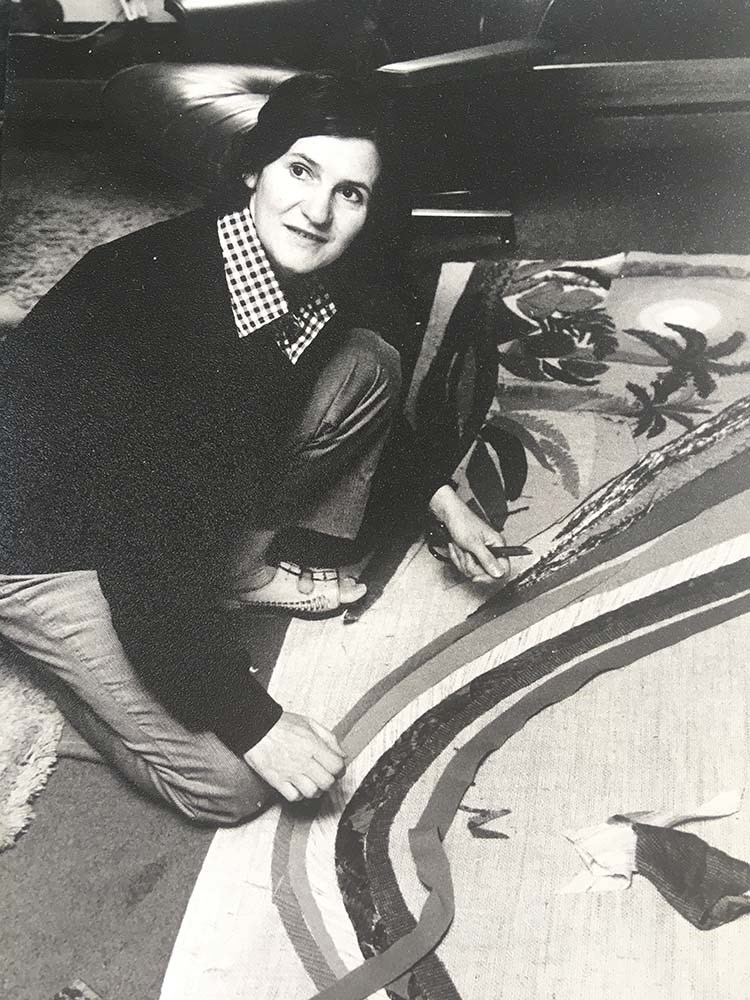 Image: Janet Rawlins working on one of two 12ft long panels commissioned by the National Coal Board for their London Headquarters, Hobart House. 1985. Photograph courtesy of Janet Rawlins.

In the run up to the opening of her exhibition at Leeds Arts University Janet spoke to us about her career, inspirations and her memories of her time studying in Leeds:

‘My Father, E.J.Rawlins, longed to be an art teacher, but had to go into the family paint firm. To “get it out of his system” his father allowed him to attend Leeds School of Art for one day a week. He became very friendly with the principal, Harold H Holden, with whom he seemed mainly to study J.S.Cotman’

‘I was carried around our living room from a very early age, stopping at each of the collection of etchings including one by Harold H. Holden. My father started taking me out sketching from age 8, so I was continually told “Mr Holden said this.. Mr Holden said that.” I imagined that somebody who had taught one’s father must be well over 100.

Around 1947 my father and I joined Otley Arts Club and painted Dales landscapes every weekend…Watercolour was not fashionable, I was teased by student friends….. but it was useful experience when I later taught adult amateurs. Among the members were elderly artist Owen Bowen, and Joseph Appleyard- who after National Service attended Leeds College of Art for a year or two. They both encouraged me to exhibit at the annual Leeds, Bradford, and Wakefield Yorkshire artists exhibitions, and regularly at the Royal Academy Summer exhibitions.’

‘Art students in the 1940s were very different from today. Many of us came straight from school, age 16, and most lived at home. Petrol, clothing and some food was still rationed and on ‘coupons’. Transport was limited, few if any had cars… I travelled to college each day the 4 miles from Horsforth on the tram. I lived on the “wrong side” of the town as most social occasions were in Headingley or Moortown so I and various friends had to be ferried to and fro by parents..

In 1947 a huge influx of ex servicemen arrived and more than doubled the usual numbers. An old primary school building had to be commandeered on West Street, a mile or two from the college. We walked there each morning and were tutored chiefly by kindly George Waite. Our illustrations were submitted, and pinned up on the board with the best in the centre and the worst on the ends! We returned to Vernon Street in the afternoons to work on a choice of crafts, plus attending calligraphy class with Tom Swindlehurst. (A problem for me, being left handed, but I managed to overcome this and the influence is still with me) and life classes with nude model Molly (Cornelius). One day Eric Taylor, then head of the School of Design, came in to find us quietly drowsing. He shot out, returned with sheets of black paper and white chalk and shouted “Now, DRAW!” (He later became Principal, and after retirement a good friend).’