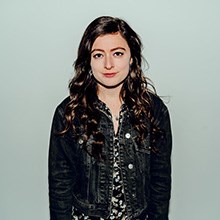 Jess is a songwriter, vocalist and synth player with interests in pop music of the 1980s and 1990s. She is a Senior Lecturer of songwriting for BMus (Hons) Popular Music Performance at Leeds Arts University and Rockschool Vocal Tutor. Her BA Hons in Music Production was awarded by Leeds Beckett University in 2014, the same university who awarded her an MA in Popular Music and Culture in 2017.

Jess’ passion for songwriting has involved a diversity of projects. Her solo work ranges from cinematic to synthpop-styled, while her collaboration projects include works in the pop and metal styles. Jess regularly collaborates with singer-songwriter Tobias Joel Ward, former punk artist Bishmanrock, and Joe Leonard - lead guitarist of Manchester metal band 40,000 Leagues. Jess has also written music for synchronisation, including audiobook work, game music and soundtrack.