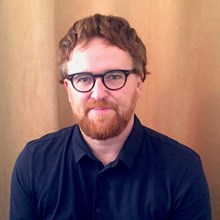 Tom Palin is a painter and Subject Leader on the BA Fine Art course. He also Co-ordinates the MA in Fine Art. Tom’s practice explores the relationship between the object and picture-aspects of painting. His research focuses on the legacies of formalism and Romanticism, with practical and theoretical applications. In particular, he seeks – with recourse to the philosophical works of Martin Heidegger and Hans-Georg Gadamer – to reframe and resituate the notion of a medium for painting.

Tom graduated from Liverpool John Moores University with a BA (Hons) in Fine Art in 1996 and a PGCE in 2004, and from The University of Manchester with an MA in Art History in 2006. He completed his PhD in Painting at the Royal College of Art in 2018. He has undertaken professional residencies in Dublin, Munich and Prague, and his work has been included in many group exhibitions. Solo ventures include: Elegies in Grey, Leeds Arts University, 2018; The Big County, Victoria Gallery, Liverpool, 2011; In Two Minds, Central Art Gallery, Ashton-Under-Lyne, 2010; A Room with a View 2, View Two Gallery, Liverpool, 2008; Between Then and Now, Dean Clough Galleries, Halifax, 2005; A Room with a View, the Atkinson Art Gallery in 2004; and Pride of Place: A Painter’s Perspective, Yorkshire Sculpture Park, 2002 (Feiweles Trust Bursary).

Awards for painting include: The Alumni Award (Liverpool University & Liverpool JMU, 2005); The Gilchrist-Fisher Memorial Award for Landscape Painters (Rebecca Hossack, 2004); The Emerson Group Award (Manchester Academy of Fine Art, 2002); and The Hunting Young Artist of the Year Award (Royal College of Art, 2000). In 2006, along with illustrator Ali Graney, he founded Hydra Arts.

Palin, T. (2020) ‘The context of medium specificity: from Riegl to Greenberg’, Journal of Contemporary Painting, 5(2).

The BA (Hons) in Fine Art involves you in a diverse, lively community of people experimenting, challenging, learning and engaged in the business of being an artist in the contemporary world.