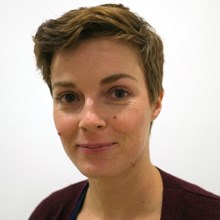 Her current work includes Precarity Pilot, an online platform addressing issues faced by socially-engaged yet precarious designers; COMUNfARE, a practice-led research on commons and community economies in the Italian Alps; Phd By Design, a research-led platform exploring what forms of knowledge production and dissemination are productive for practice-based design research.

At Leeds Arts University, her commitments include contributing to the institution’s research strategy, mentoring research-active staff and organising a yearly research trip abroad for the MA cohort.

Bianca completed her doctoral degree at the Design Department at Goldsmiths in February 2014. Her thesis ‘Designing Economic Cultures’, investigated the political economy of design and explores, by way of practice-based research, the potential of peer-to-peer activities to enable structures that support the resilience of socially and politically engaged design practices.

Since 2005, Bianca has worked with Fabio Franz as the collective ‘Brave New Alps‘.

Report
Cantiere per pratiche non-affermative. Designers’ Inquiry: An Inquiry on the Socio-Economic Condition of Designers in Italy, 2013.