A range of gallery pieces were explored from a postcolonial point of view by an exciting panel of speakers which included Carol Sorhaindo who is currently studying for her MA Creative Practice at Leeds College of Art and Sandra Whyles who is a practitioner having previously completed the College’s Access to HE course.

The evening was well attended and it began with a screening of a beautifully made film Towards the Possible Film (2014)by Shazed Dawood. Then the audience was directed to the Arnold and Marjorie Ziff Gallery, where the first of the discussions took place. Prashant Pandya led a critical reading of Retribution (1858) by Edward Armitage; an example of imperial propaganda by the British Empire that refers to the suppression of the Indian Mutiny in 1887. Here the huge figure of Britannia seizes the throat of the exotic tiger; the bodies of dead mothers and children lying under foot. The audience responded to the various meanings of the image and its representation of imperial power.

General Gordon’sLast Stand (1885) by George William Joy was the subject of Sandra Whyles’ contribution. It was evident that she had undertaken a lot of research on both the artist and the subject of the painting, which memorialised Gordon’s death in 1885. She framed this work in relation to her own viewing experiences in the gallery as a small child and how there were not many black people, if any, represented in the art works on show. In General Gordon’s Last Stand the Muslim soldiers were mostly painting so that their black faces are hidden, however, Sandra pointed out that the expressions of two of the attackers are turned to the audience and it was this that fascinated her as a young child. She argued that the gallery is owned by everyone and how people from all backgrounds should be able to see themselves represented in the permanent collections of the gallery, rather than just the dominant social groups.

The discourse was continued in the Henry Moore Room where Carol Sorhaindo talked about a painting of a young black woman from the gallery collection, Melita (date unknown) by Ronald Ossory Dunlop. Melita means ‘honey-sweet’, however, Carol pointed out that the image of the woman was more complex than the title suggests. She seemed to have an introspective mood - indicative of  a rich interior life. Dunlop was an Irish artist who worked extensively in England.  Carol, who had just been to the Caribbean to undertake primary research for her MA Creative Practice, talked about also belonging to two places at once and how this had impacted on her own creativity. 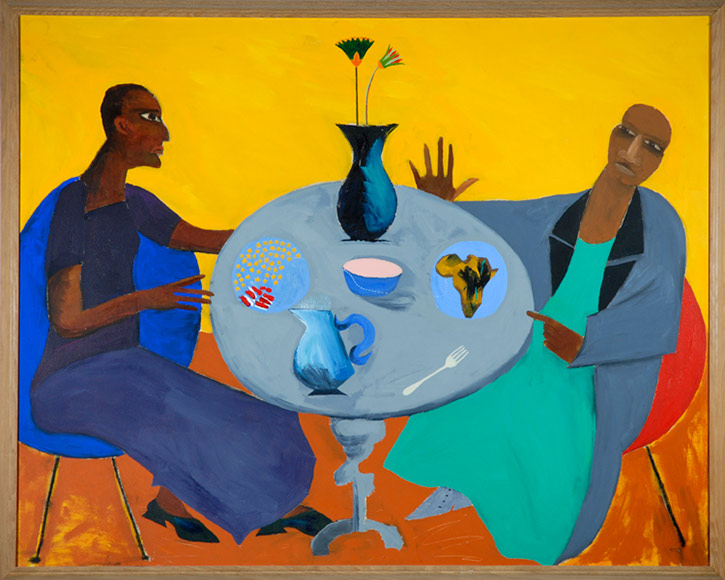 Last but not least was an excellent talk from Lubaina Himid based on her painting Five (1991) which is on long term loan at Leeds Art Gallery. The importance of getting the work of black artists into permanent collections (even if they are not always put on show) was discussed. This is because a ‘dialogue’ between works by a diverse range of artists, who reflect the rich social and cultural context of a public gallery, is facilitated.   The theme of Five was ‘revenge’ where two black female artists are painted sitting at a table debating and plotting. Labaina pointed out that it was rare to see two black women together within a painting; these two people are not abstracted or objectified black female stereotypes, but two individuals shown as having different tastes; different looks and different points of view.

Overall this was an interesting and thought-provoking event and it was inspirational to see alumni and students from Leeds College of Art taking part in an event about issues that have continuing local and national significance.

Review by Sam Broadhead, Head of Research and Programme Leader for the MA Creative Practice.