Known for his distinctive style, world changing voice and collaboration with Hunter S. Thompson, it was a real honour to hear Ralph Steadman talk to a room full of inspiring young artists eager to hear everything he has to say. A man whose list of works stretch far into the distance, giving his own style, perspective and angle even to well known and much loved classic literature; using his own tone of voice to transform these pieces as his own.

Live artists talks are always a great chance for students and staff at the College to not only listen to, but to interact, get advice and in turn be fully inspired in their own work. As the Skype call rung out across the studio theatre, you could see people shuffling with excitement to then be met with the cheerful face of Captain Hat wearing Ralph Steadman and so began an insight into his studio, way of working and a body of work that stretched across his whole life career.

The talk kicked off to a cracking start as Steadman sneaked off camera to reappear with a mirror stating “something experimental here, I want to see if you can see yourselves,” as he positioned the mirror in front of the camera. What in aid of, you ask? What I originally thought was just a stunt to make us laugh took a turn I didn’t expect as he continued with “That’s what visual things are all about, the accidental, if it’s not an accident, it’s not fun. It’s not about being vicious or unkind or mean or generally unpleasant, it’s about being naughty.”

He then began show work around him and when asked “What did you make it in response to?”

He shouted, “For no good reason!”

We follow him through the studio tour room after room, in a labyrinth of ink, paper and a trumpet of which Ralph gives us a show, unfortunately just as the screen freezes; a wave of sighs and oh no’s showing just how much the audiences was enjoying this.

It was very exciting to see his work as a student.  As his daughter stated “even Ralph had to learn somewhere,” it is easy to forget that every creative person starts off somewhere and we usually see them for the voice they have developed over time and through life experiences; which can be a little bit scary for students to see as they try to figure out their own path. To see someone such as Ralph Steadman from the start helped to piece together the story and journey of his creative process.  He not only showed us his earlier work, he told us how they came about, what formed this and who taught him. A point at which a lot of us are at, it is refreshing to hear this first hand from artists you admire. Learning from the tutor during life drawing, he describes it as “making a mess and not getting it right for the tutor to come over and point out mistakes” This would happen 24 times in each class, creating 24 individual lessons. It’s funny to hear how he was taught this way; mainly for his ideology that there are “no such thing as mistakes.” Ralph entertained us with  short anecdotes about some of the characters that used to life model, which a lot of people who go to life drawing classes can relate to; making you realise you're not alone and what a laugh it is.

“I really wanted to learn to draw, most importantly.”

Let's look at the drawings “to hell with me,” proclaims Steadman as he stands behind a stack of work, and we are given a special look into some selected works among the mountain of papers.  Scrolling through pieces such as a gardener watering his awards, a man going to get a book from a library, but having his forehead stamped instead. A weatherman being pelted because he is giving us a bad performance, a street band with a grand piano, a man in a canoe with a horn and a vicar going to get a new suit.

“I was trying to be rebellious in my work, which gave it a sort of edge. I wanted edge in it, if you don’t get that it’s uninteresting and such. If it doesn’t excite me what the hell is it going to do for someone else? It’s about conveying your inner self, you’re externalizing it on paper or whatever you use, canvas, acetate, anything!”

“It had to sort of either make people angry, amused, it had to do something really positive otherwise it was just a drawing filling a space The finished pieces research stories and  rough sketches  all help to clarify Ralph’s way of working and thought processes. “It must be first hand, you don’t go and report on the story you become the story. That’s what gonzo journalism was.”

As the talk came to an end, students were able to ask questions, which sparked all manners of interesting, wild answers.  From “Will you be my Valentine Ralph?” A question that ended in an exchange of drawings and a “Yes”. To mistakes and erasing, with a shouted response of “DON'T RUB OUT! There is no such thing as a mistake, it is an opportunity to do something else.” The question asking the difference between good illustration and truly great illustration sparked an inspirational response about honesty; illustration is a diagram nothing more, we do drawings and the meaning of the art to the artist. “We are too full of rules and regulations now; it’s the death of fun,” leading on to a fantastic story about the past with Hunter S. Thompson involving expensive yachts and spray paint. And ending on “What advice would you give to a student starting out?” the instant response being “give it up.” Or “dedicate your life to making mistakes that matter.”

Illustration student Sophie Wright was involved in asking one of these questions, and I had the opportunity to ask her about this experience.

“As a fan of Steadman’s through “Fear and Loathing”, getting to speak to him and also having the opportunity to look through his other work was an amazing experience.”

It is safe to say Ralph Steadman is an illustrator who has changed the world through his life time of work, that stands loud and proud. He portrayed his unique tone across everything he applies ink to and, on top of that, gave a talk that has influenced and motivated everyone in the room in their own practice. Everyone left with a smile on their faces, heads full of inspirational words, and a feeling that they could take on the world. 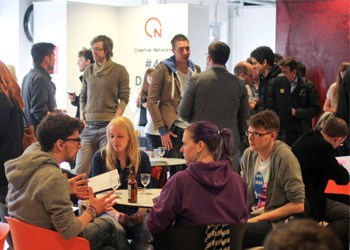 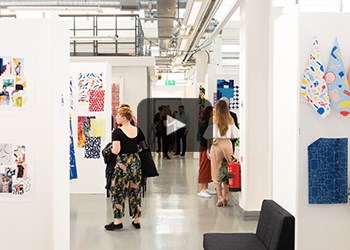 Each year the University becomes a gallery and showcases the final year students' work to artists and industry from across the UK.