'Leave your ego at the door' says Skunk Anansie's Skin

This week, Leeds Arts University welcomed Skin, acclaimed recording artist, DJ and lead singer of multi-million selling rock band, Skunk Anansie, to share insight into her approach to performance song writing, singing and the development of her own unique style.

Skin led an afternoon masterclass of Level 4 and Level 5 students studying BMus (Hons) Popular Music Performance, followed by a public in-conversation event in the evening at the University. 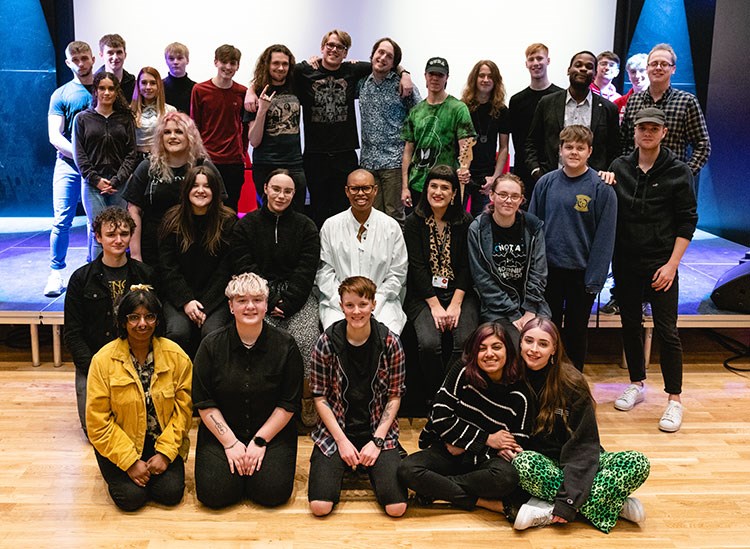 An important part of studying at Leeds Arts University are the opportunities to hear directly from those working in the arts and creative industries. During the masterclass, Skin shared advice on song writing – ‘have something to say, people will know if you’re not being genuine’ – her personal taste in music, from Rage Against the Machine to Billie Holiday; and fighting through performance nerves. On being in a band, she explained the importance of leaving your ego at the door, listening to everyone’s ideas and always reaching slightly beyond your grasp. 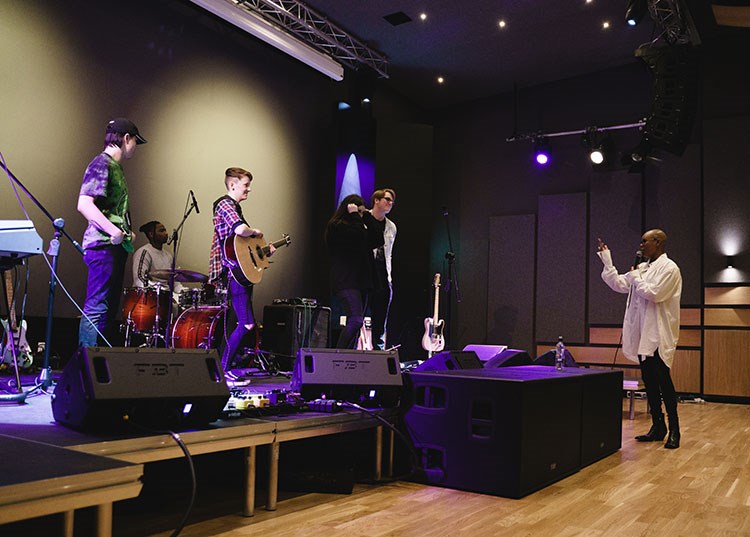 The highlight of the afternoon were the students’ band performances including some of Skunk Anansie’s most memorable hits, such as Brazen (Weep), Twisted and Weak; as well as students' own original songs. Skin gave thoughtful and generous feedback, noting the high standard and encouraging students to connect with the audience. Skin described working with the students as an ‘awesome experience’ and was heartened by the amount of talent in the room.

This week, Leeds Arts University welcomed Skin, acclaimed recording artist, DJ and lead singer of multi-million selling rock band, Skunk Anansie, to share insight into her approach to performance song writing, singing and the development of her own unique style. The conversation began with her formative years in Brixton, south London and spanned her career from developing her technique as a jazz singer; the mistakes she made with her first band, Mama Wild; Skunk Anansie’s first Top of The Pops and headlining Glastonbury; to her most recent appearance as the duck on The Masked Singer. She also spoke of the prejudice that she has experienced as a powerful black woman singing in a genre traditionally dominated by white men. Skin ended the evening with a couple of teasers: her memoirs will be published later in the year and a very special collaboration is soon to be announced.

Creative Networks is Leeds Arts University’s free professional events programme of talks delivered by high profile speakers from across the creative industries. Sign up to the Creative Networks mailing list to by the first to hear about forthcoming free events.

Skunk Anansie are on tour throughout this year in the UK, Europe and Iceland.