Ed O’Donnell, a former student, life model and tutor at Leeds College of Art and a renowned jazz trombonist, passed away aged 87 on 14 February 2014. 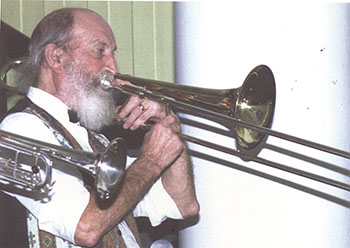 Ed was instrumental in moulding the Leeds jazz scene, playing for many years at venues across the city.

Ed returned to civilian life, and worked in an office after spending three years of National Service as a Bevin Boy in the coal mines of Barnsley and Middleton. It was a chance encounter which led him to meet the jazz musicians of the Leeds College of Art.

In 1948, Ed heard a trombone playing whilst walking past Vernon Street one day, and after venturing inside, found Ted Fenton, the then trombonist of the Vernon Street Ramblers. When Ted left to do National Service, Ed stepped in, playing lunch time sessions at the College and various charity events, including student Rag week. Playing one evening Ed was approached by the Yorkshire Jazz Band. Soon Ed was playing with them at the London Jazz Club, along with Alan Cooper, clarinettist and founder of the Vernon Street Ramblers, Diz Disley on banjo and Dick Hawdon on trumpet. Ed went on to form the ‘Paramount Jazz Band’, ‘The White Eagles Jazz Band’ and most recently, Ed O’Donnell Jazz.

Having studied at the Art College, where he met his wife Ann who was also studying jewellery design, he swapped his life as a professional jazz player for being a lecturer in hand engraving at the college on returning from London.

Ed taught in the Jewellery department of the College until 1992 and returned to play at the 2003 Vernon Street Centenary celebrations to much acclaim from his old contemporaries. Ed will be dearly missed by all who you knew him.

Ed O’Donnell is survived by wife Ann and their two daughters, one of whom currently teaches at Leeds College of Art.

Above photograph of Ed playing in Vernon Street by Jac Callaghan, at the 2003 reunion. 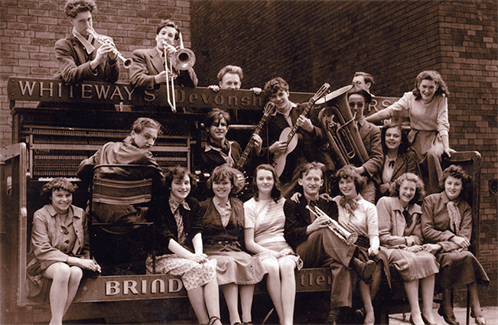