An Art Student in Wartime

Christine Schofield (née Liley) was a student at Leeds College of Art from 1943-1948, here she remembers student life during World War Two...

Monday mornings, queue for our ration of cartridge paper, mostly used on both sides, as we did with our painting boards, we often had to flat white paintings over and use them again.  The two College secretaries, in charge of supplies were scrupulously fair; a notice was displayed when supplies arrived, and which department’s turn it was to have them…Word quickly circulated and a stampede ensued in the dinner hour, not only from our College.  The queues were enormous, it was most frustrating when one got to the front and supplies ran out, however we cut rubbers etc in half to share with our disappointed friends.

The British Restaurant, in the Town Hall basement was only ten old pence for two courses….another enormous queue, down steps minus a roof (bomb damage) replaced by noisy, flapping tarpaulins with a  habit of tipping collected rainwater on to the queue……

Despite this, and the war, we did have fun; the usual Bohemian Ball at Christmas and end of term parties….We had some good musicians, so had jazz sessions in the dinner hour, danced and sang along, joined latterly by frank Ableson (Frankie Vaughan) who became the Jazz group’s vocalist.  Later he was ‘discovered’ in the rag shows.  We were lucky to have all the big names and companies at the Grand Theatre so often, they spent more time in the provinces because of the bombing in London.  We were also lucky to have the Dulwich Collection evacuated from London to Leeds City Art Gallery. 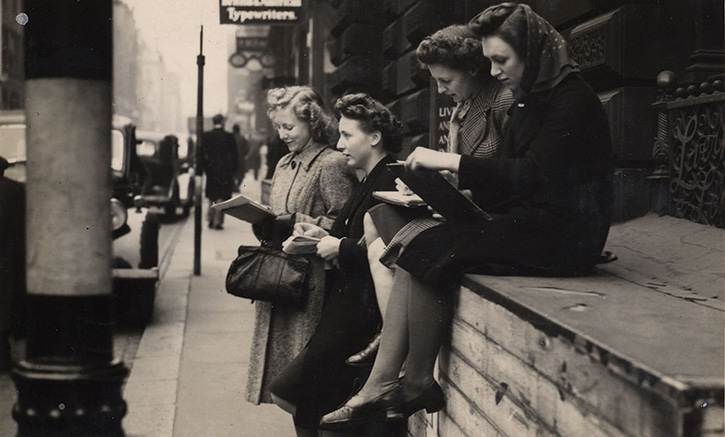 Four of us sketching at the bottom of Albion Street sitting on boxed-in sandbags, 1944.  Lamp-posts had white bands around them so pedestrians did not bump into them in the blackout. 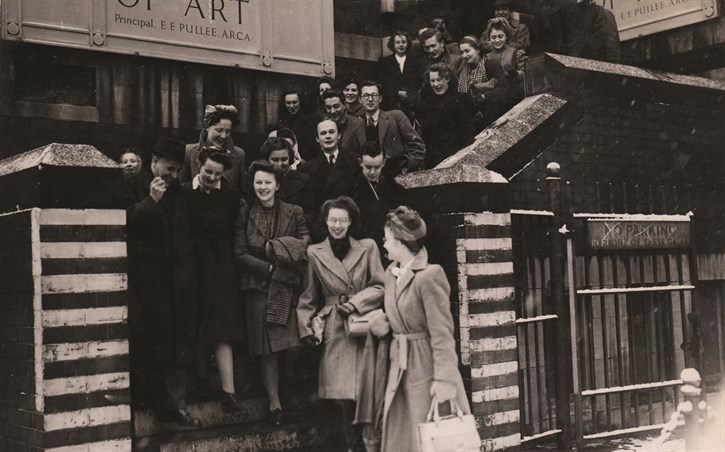 Students and staff on the College steps in Vernon street prior to going to the Matisse & Picasso Exhibition in 1947.  The white stripes on the pillars and coping were to assist pedestrians in the black-outs.  Front left, Mrs L Dixon, Head of Pedagogue Year.  Top of steps, partly obscured, Mr. LDamiels, Head of Painting. 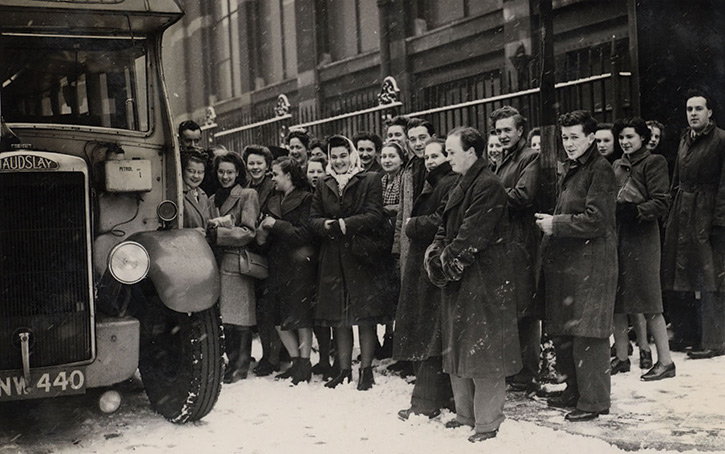 Students and staff boarding the bus in Vernon Street for the Matisse & Picasso Exhibition in Manchester in 1947.