A New Reality: Part 2 is currently showing at The Tetley, Leeds until 15 June including the new exhibition Down Time by Ben Cain, an alumnus of the Foundation Diploma at Leeds College of Art, class of 1994.

This exhibition of new sculpture, film and performance works, explores ideas around what ‘work’ is, or has become, utilising work-related paraphernalia from the past. We caught up with Ben to find out about his time studying in Leeds and his first exhibition.

On 31 May from 12 to 4pm there is the chance to join Ben for the ‘Tool Amnesty’. The public are asked to bring their well-used and perhaps outmoded hand tools (like hammers, screwdrivers, chisels, rakes, etc.) to contribute to a temporary outdoor installation. Tools will be added to a 2-day installation on ‘The Slab’ an empty piece of land adjacent to The Tetley that was formerly a bustling part of the brewery’s production line. The installation will then be documented and photographed from above. 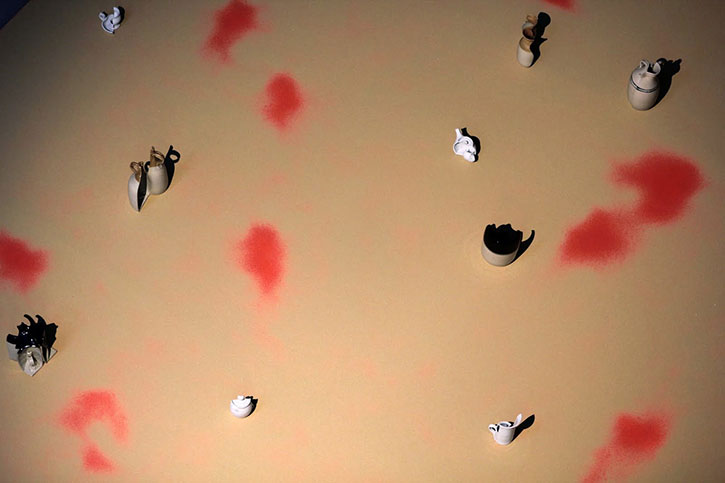 What did you enjoy about your time at Leeds College of Art and how did the course help you in starting out professionally?

I was so relieved, ecstatic, even that the school years were over, so much so that anything we did during that year seemed fantastic! Sudden meeting of like-minds, loads of difficult and challenging ideas, parties, relationships. Then the school, which in itself was enormously exciting, was relatively unregulated, wonderfully illicit things could happen in seemingly forgotten spaces in the building. Everyone is always very romantic when it comes to recalling their first art school experiences, however there is something very special about that old purpose-built art school (Vernon Street). In terms of starting out ‘professionally’, I have no idea, in fact I’m increasingly aware of the tendency to think much too ‘professionally’, having said that, that time did encourage me to take my work more seriously, and perhaps to bear in mind the fact that hundreds of other very interesting art students were engaged in the same things that we were.

Do you have any memories of tutors or specific projects you worked on?

I joined the foundation just as Sean Kaye had been appointed. He had an enormous amount of energy, ambition for his students, and a way of thinking that was incredibly critical, searching and often surprising! I think he had a huge effect upon many generations of students. It was such a great team of tutors across all areas at that time though. There was also a slightly Tony Hancock-like figure who moved around in the basement whose catch-phrase was “it-it-wiv-an-ammer” – he had a slightly curmudgeonly approach, but in an odd way his presence was valuable.

Is it nice to exhibit in Leeds, and do you think the city has changed much since you studied here?

Actually it’s a great pleasure to be able to show some work in Leeds. I’ve been exhibiting internationally for over 10 years now, and until now haven’t had a chance to show work to lots of the people in Leeds whom I feel very close to, so this has been a joy. 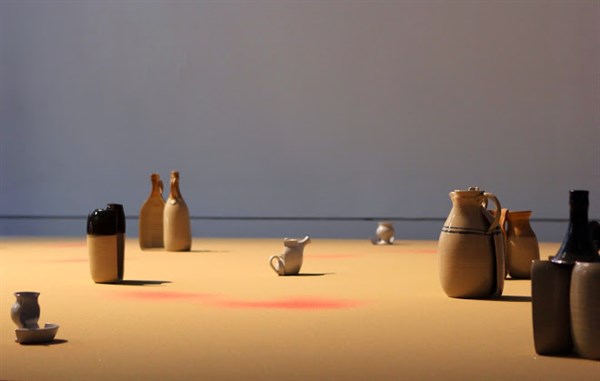 Can you tell us about the work you are making at the moment, including Down Time at The Tetley?

At present I’m interested in questions about who or what is doing the work, when they are working, and anyway what is ‘work’. Activity, work, production, reflection, they’re all deeply intertwined. The aim is often to break up any stable sense of our own spectatorship, diverting us from a single version of what we’re doing into a playful to-and-fro about what we could be doing – before, now and after.

Is something being produced? If so what, and by whom or what? (assuming that it might be a seemingly inanimate thing that’s doing the work). This question becomes especially pressing when divisions between production and consumption might be collapsing.

In moments of ‘down-time’ energy-generating systems produce excess energy that is stored for later use. Here I’m considering waste production and non-productive activity in relation to self-preservation – i.e. acts which might be knowingly futile in that they realise or manifest nothing in terms of material output, but nevertheless provide a sense of proximity to, or engagement with the production of the material world.

A contemporary form of mild psychosis in the field of work might be characterised by a state of functioning/working in contemporary conditions (immaterial labour etc.) but doing so without being able to detach from the norms of industrial-era labour. I’d consider each of the works at The Tetley as being physical forms of pondering on the nature of what ‘work’ is or has become. It’s a theatre of operations that largely uses paraphernalia of the past to do tasks loosely associated with the present, all the while focusing upon the position of the operator.

What are your hopes for the Tool Amnesty event?

My hope is to produce a very large circle of tools (layered head-to-toe) on an area of waste ground that was formally the site of industrial production. We’ve asked people to bring hand-held tools, but haven’t given any more specific details. What I have in mind is attempting to reveal something about contemporary and/or obsolete modes of work, types of action and making. In some sense it’s a bit like a large equation or recipe – all those tools equate to a plethora of latent actions and implied labouring which collectively suggest a sort of collaborative production, a sort of building process without any final single outcome besides the circle of tools. In this sense the circle of tools is about putting ‘on show’ the apparatus or the means of production rather than the product.

Can you give us an insight in a typical working day/week for you?

Wake up early with the eager calls of my son… I teach BA Fine Art in a couple of London art schools, so I divide my time between teaching and developing/installing my own exhibitions. I travel quite a lot, and always have a number of notebooks with me (all differently sized, but all able to fit into pockets!), I normally end up working whilst on the move. 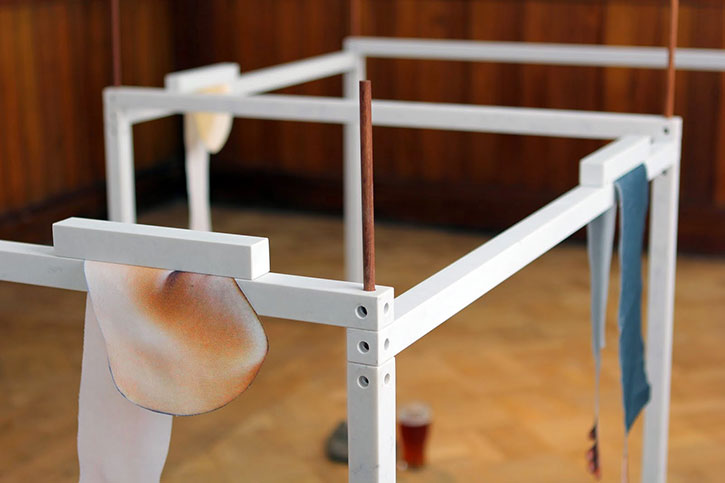 Do you have any advice for students who are graduating this year?

Don’t expect too much from the degree show. Plan what you’re going to do immediately after, and carry on…

I’ve a few things happening in the coming weeks, including a show in the Museum of Modern Art Belgrade, another is a couple of small works for a pub in the East End of London. They are works that sing Tina Turner, hope for a late night dance, and when you look at them they play dead – it’s a work that’s shaped by the immediate context!