Victor Burgin was born in Sheffield in 1941.  He studied at the Royal College of Art and at Yale University and took part in the exhibition When Attitude Becomes Form at the ICA in 1969, followed by many solo exhibitions including shows in Paris, Washington, London and Oxford.

Burgin’s work is often based around the investigation of power, society and sex, taking the philosophies of Freud, Marx and Barthes as their inspiration.  He was nominated for the Turner Prize in 1986. 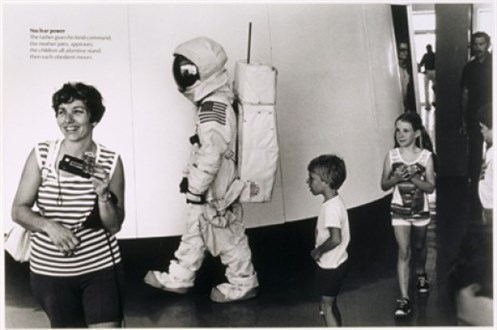 Burgin taught at Trent Polytechnic from 1967 to 1973 and at the London College of Communication from 1973 to 1988. From 1988 to 2001 he lived and worked in San Francisco and taught at the University of California.  In 2000 he taught at Cooper Union in New York and from 2001 to 2006 he was Millard Professor of Fine Art at Goldsmiths College, University of London.

This exhibition features his US 77 series of photographs taken in America during their Bi-Centennial Year celebrations in 1977 as well as one his best known works What does possession mean to you?