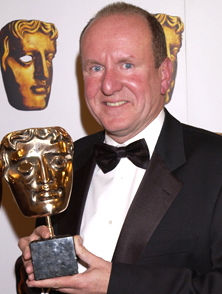 Ian Livingstone is one of the founding fathers of the UK games industry.

Ian will discuss his creative process from co-founding the iconic Games Workshop and Dungeons & Dragons through to becoming an advisor to the British Council. He will outline his thoughts on how industry and education have responded to make the UK into a world-leading force in games and visual effects and discuss the challenges, opportunities and future trends in the innovation of the creative industries.

Ian co-authored The Warlock of Firetop Mountain in 1982, the first Fighting Fantasy gamebook in the series which has sold over 17 million copies to date in 30 languages. In 1984 he designed Eureka, the first computer game published by Domark. He joined the board in 1992 as a major investor, overseeing a merger that created Eidos plc in 1995 where he served as Executive Chairman until 2002. At Eidos he launched major franchises including Lara Croft: Tomb Raider.

He co-authored the Next Gen review published by NESTA in 2011, recommending changes in ICT education policy. He was appointed OBE in 2006, and received a BAFTA Special Award, a British Inspiration Award, the Develop Legend Award, an Honorary Doctorate of Arts by Bournemouth University and an Honorary Doctorate of Technology by Abertay University, Dundee for his contribution to the UK computer and video games industry. He was appointed CBE in the 2013 New Year Honours list.

Ian is also the Founder of The Livingstone Foundation, Chairman of Playdemic Ltd, Chairman of Midoki Ltd, Chairman of PlayMob Ltd, Chair of Skillset's Video Games Council, Chair Next Gen Skills Committee, Vice Chair of UKIE, Member of the Creative Industries Council, Trustee of GamesAid and an Adviser to the British Council. In 2012 he was listed as the 16th most influential person in the UK's digital economy in Wired Magazine.

We would like you to join us from 6pm at Blenheim Walk on 10th December, for drinks - prior to the talk there will be a range of goods on sale from the local independent art and design bookstore Colours May Vary.

Please bring your pocket money (cash only) as Travelling Man, the comic books, boardgame and RPG store located in Leeds, Newcastle, Manchester and York will be holding a stall and there will be an opportunity to get books signed by Ian before the talk.