During his childhood years he always used drawing as a means to play, daydream and emulate his favourite cartoons, objects and people.  He carried this on into his studies as an illustrator and graphic designer at Nottingham Trent University. Most of his influences stem from a love of computer games, comic book heroes, cartoons and Japanese manga, using them as reference and homage towards his work. 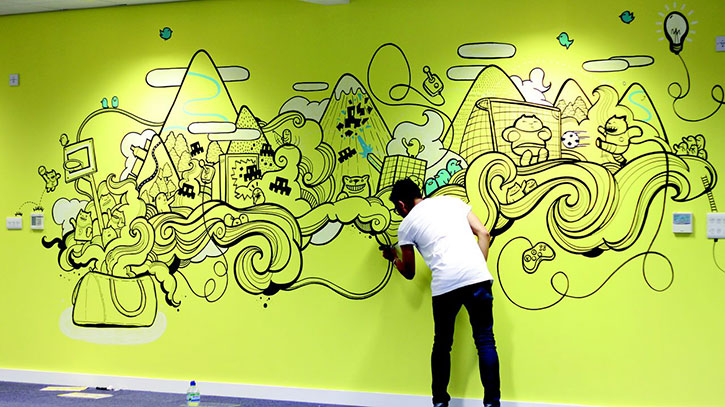 Geo has been working as a freelance illustrator since his graduation in 2007 and has worked for various clients including Microsoft, Whole Foods, Facebook and Converse, producing murals for their studio and office environments. Much of his mural work is commissioned on the proviso that it will inject a sense of fun and visual punch to the work space.  Many of his murals feature little characters that interact with physical furnishings such as light switches and plug sockets. Geo also enjoys interacting with the office occupiers, asking them for suggestions on characters and objects that will directly relate to those who see the walls every day at work. As well as producing art work for interiors Geo has applied his work across printed media and street fashion, particularly as a former partner in the Hantu Collective based in Sheffield. 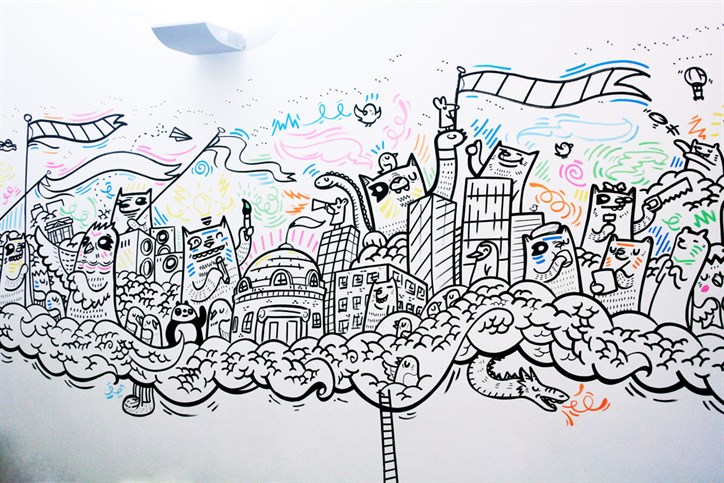 In addition to his exhibited work at Leeds College of Art, Geo was also invited to doodle on the walls of the Vernon Street gallery and downstairs café. Geo said:- "In the end I created a mural rich in colour and crazy energy, much to the likeness of the College and its students.”

Geo approaches his work with a sense of fun and naivety which allows his doodled line work to express a looseness with line and colour. He prefers not to use pencils beforehand as tracing over pencil lines becomes tedious and disrupts the flow of free handed drawing. Geo sees drawing as the base of his creative process and as a means to pin down his ideas to penning in the final image.