In February 2019, the grand opening of Leeds Arts University’s new build coincided with a solo exhibition ‘Yoko Ono at Leeds’. This high profile occasion invited cultural leaders from across the region, and offered an important opportunity to take stock of our art history as well as our present offer and future directions.

One moment that seemed worthy of further research was Yoko Ono’s 1966 visit to Leeds when she performed her ‘Bag Piece’ in our Vernon Street lecture theatre. Surrealist artist, Patrick Hughes, was teaching at the time, and provides the following eyewitness account:

“Fluxus artist, Yoko Ono, visited with her then husband Anthony Cox, and their three-year-old daughter Kyoko. When we came into the lecture theatre, Yoko and Anthony were hidden in a large black bag on the dais and a full auditorium of students and staff looked at the bag for an hour. They did not move much. We could not see them, but we learnt that they could see us through the material.”

Yoko Ono (b.1933) is an internationally renowned peace activist and multimedia artist. While many people in the North are aware of her status as a cultural icon and musician, some audiences may be less familiar with her conceptual practice of instruction-based artworks and interactive installations. As chief proponent of the Fluxus movement alongside George Maciunas and John Cage, Yoko Ono became a key figure in experimental practice in 1960s downtown New York, with ripple effects in DIY culture across Europe and beyond. This exhibition sought to bring this body of work to wider critical attention and to reflect on this avant-garde moment in our past. Students quickly took ownership of the exhibits and provided some innovative and powerful responses to her instructions. The audience became part of the work.

The exhibition comprised five installations, many of which expanded and accumulated as the exhibition progressed. For the opening night, a special rendition of her ‘Sky Piece to Jesus Christ’ (1965) was realised by our Student Ambassadors in collaboration with performers from The Royal Northern College of Music. The art students wrapped the musicians in bandages while they played, an ambivalent statement on the nature of artmaking, at once both a gesture of care and iconoclasm. Meanwhile, ‘Wish Trees’ (1996) and ‘Mend Piece’ (1966) provided opportunities for creative interpretation, the former a platform for hopes and dreams, the latter an ‘archaeological’ rethinking of the genre of still life. 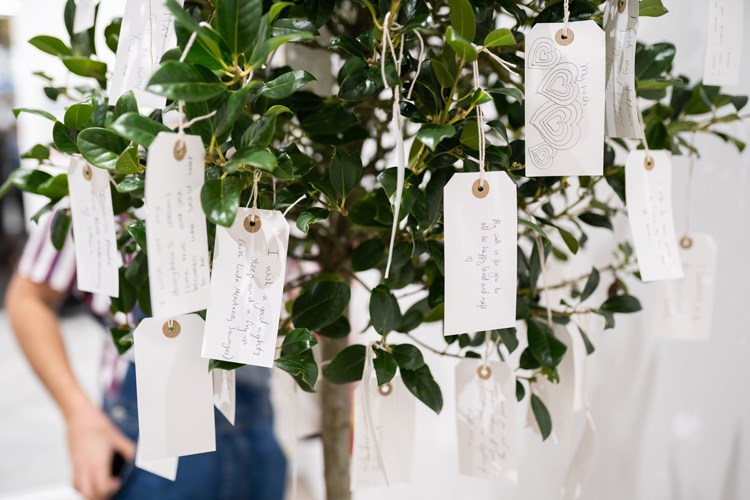 Vice Chancellor, Professor Simone Wonnacott, has the following observations which are included in the film:

“We are really delighted that we got the Yoko Ono exhibition which is really a coup for Leeds and for the UK. Yoko Ono actually exhibited in this University when it was Leeds College of Art in 1966, so there was already a link there. Dr Catriona McAra, our University Curator, got in touch with Yoko’s representatives. She felt really warmly towards us because she remembered this link.

There is also an empowering women part of the exhibition where Yoko asked for women internationally to send in their thoughts on what it is like to be a woman. Some of those stories are quite distressing but they are also really moving, really powerful. It really speaks to us as a society.”

We commissioned local musician, researcher and alumnus, Dr Andy Abbott, to write the accompanying interpretation text on play and participatory practice which can be found here.

The exhibition was highlighted in The Times, and received favourable reviews in The Yorkshire Post and Corridor 8 Magazine. We also welcomed Leeds Art Walk who were offering a concurrent, one-off screening of Jonas Mekas’ 16mm film, ‘Zefiro Torna or Scenes from the Life of George Maciunas’ (1992) courtesy of Will Rose at Pavilion.