The IRL: In Real Life residence was a 2-month artist residency that took place in Artcore - an NPO organisation based in Derby. The opportunity was published in CuratorSpace, where there was a lengthy description of what they were looking for- it mainly said they were looking for two artists to work on proposals that could be sculpture, painting, or any other medium as long as it dealt with contemporary life, technology, and the way that it affects us. I thought that it was an opportunity that fit my work very well so I wrote a project proposal that I sent along with my CV and a couple of references. 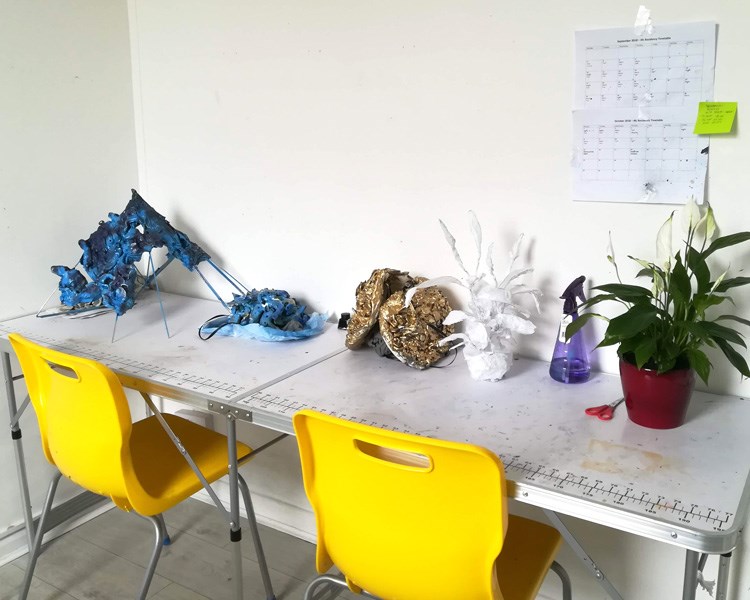 Image: View of our residency studio.

A couple of days after the deadline I got an email telling me I had been shortlisted for the residency. The next step was to write a detailed timetable of how I would develop the project that I was proposing. My project was based on questioning reality and our perception of it. I made a reference to video games and how we can sense something as real irrespective of its ontological status of reality. I particularly looked at avatars and the way the disembodiment from our own body and embodiment into a technological one modifies the way we relate to others and the world.

My plan was to do a series of avatars customised through wearable art that could be seen through a VR headset. A couple of days after the timetable was due, I got the great news that I had been selected as one of the residents.

The other resident, Tom Van der Meulen, is a painter who graduated in 2017 from the University of Reading and who had worked for a year in Damien Hirst’s Factory before deciding he wanted to focus on his own art. It was great having him in the same studio space as our ideas fed of each other’s and I could see what his perspective on the art world was a year after having graduated, which is something daunting but necessary to think about right now, given that it’s my last year. 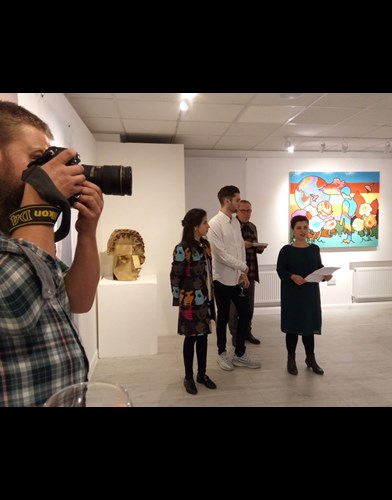 During the residency we received support in the form of a bursary, and tutorials that were given by an artist who came in selected weeks. We also had an artist talk by Helen Starr in conversation with Tom and me, during which we got some time to talk about our work to the public.

Throughout the 2 months the initial proposal evolved and was modified. My main problem was I was using VR for the first time as I thought having a bursary was a perfect opportunity to try the new medium I was interested in. However, the Virtual Reality that is accessible to those of us who aren’t programmers and computer experts isn’t completely developed, so there’s a lot of glitches. This forced me to take the project in another direction that I was still happy with. At the beginning I was concerned my project was changing, but everyone was aware that in art projects change. Not everything went according to my original plan but it still worked out to be interesting.

After the residency, Tom and I had an exhibition in the Artcore gallery showing our residency explorations and selected previous work. We worked as a team in the curation and installation of the exhibition, which lasted from 18 October to 1 November. 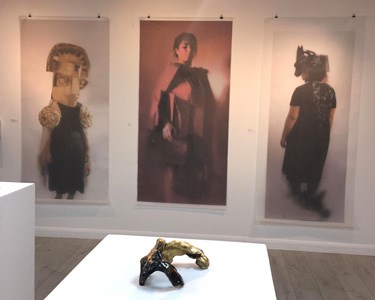 It was a great opportunity which developed my work, specially helping me to join my conceptual ideas and material practice, and it was overall a great organisation to work with.