Julia Pomeroy | Sharing the experience of my funded studio residency

As Julia prepares for the opening of a new exhibition of her work in July 2021 she tells us about her practice and experience during the residency:

From January I was awarded a residency for six-months at Patrick Studios, East Street Arts, by Leeds Arts University. I have used this time and the space to develop my professional practice in oil painting, exploring further into reconstructing atmospheric settings around contemporary figures, and producing a new series of work. 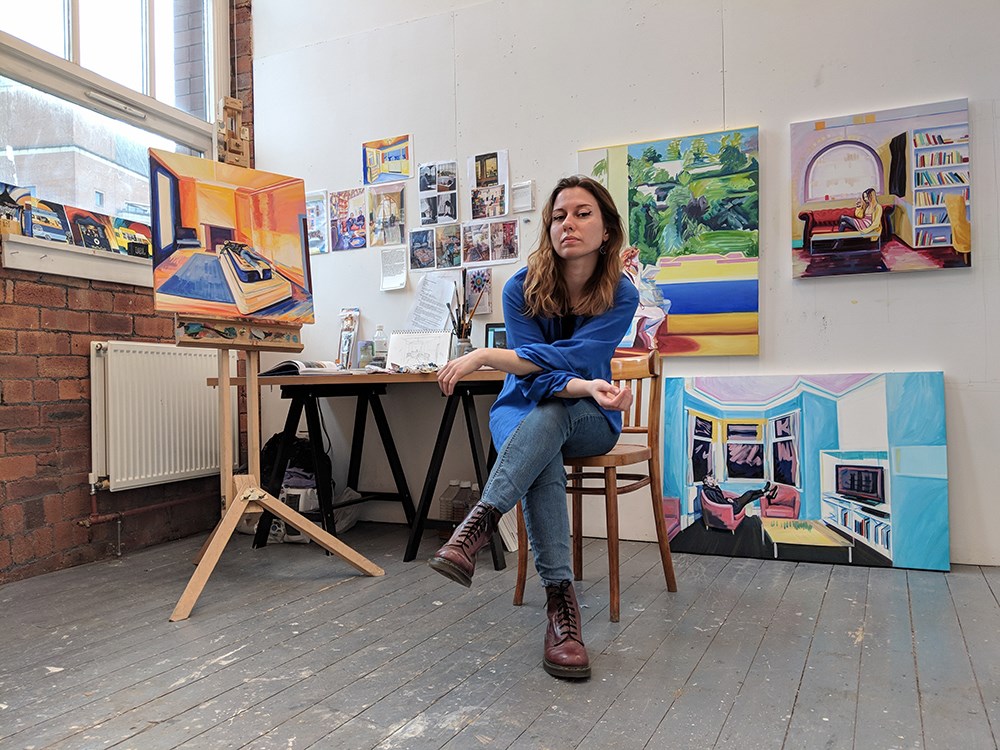 I am coming to the end of the residency now and I’m fully engaged in the direction of my current body of work and developing the early stages of my professional career. I was provided with a table and easel, two basic tools I need to produce my paintings, and the studio has half white walls and half bare bricks allowing me to play around with displaying ideas and documenting works professionally. I didn’t have the easiest start to the residency, which started in the middle of the third national lockdown. Initially it was quite isolating working in the studio on my own, the winter was a bit too dark which drained my motivation, and I greatly missed the artist network I had in the studios back at Leeds Arts University.

However, with the studio being a short commute away, I began to treat my days like having a full-time job and this routine was helpful, I began to feel lucky to get out of my house. The first month I focused on researching into artists dealing with similar topics to me such as Caroline Walker, Jenna Gribbon, Alfie Caine, and Alice Miller, and I was planning my next works from imagery I had collected of various domestic spaces; some I had taken myself or asked friends to send me photos. 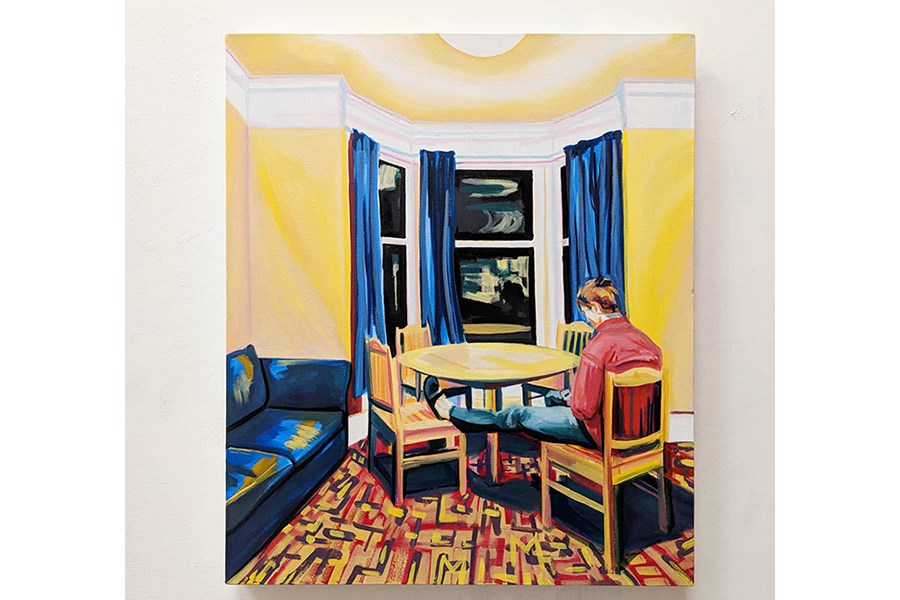 With removed access of finding new, architecturally interesting spaces to paint due to the pandemic, my normal process of documenting through first-hand experience wasn’t an option anymore. This directed the works I am now producing to be of those I know in their homes and depicting their various responses to lockdown. Further I have a large bank of photos I have taken throughout my life where I found a lot of imagery from past holidays. This then formed the overall intentions of this new series of work. Contrasting the restriction of lockdowns, being cut off from exploration of the world and relying on ourselves against the importance of the outdoors, hope return to normality in the future and a sense of coming optimism and freedom. 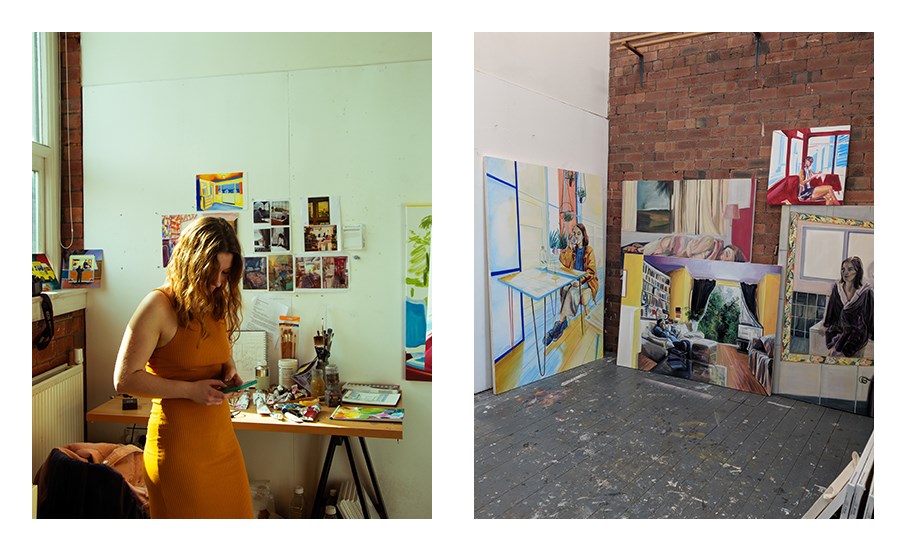 The range of spaces I have been producing oil paintings in over the last year have altered frequently in size, location, and comfort. I have been made to question and learnt to appreciate the importance and versatility of a studio space. With the unfortunate loss of access to our studios and workshops at Leeds Arts University in March 2020 due to the pandemic and lockdowns, I found myself working the dining room in my student house. Even in the back-alley too as I was determined to complete a 2-metre size painting for my degree show. Not the ideal place to be working with a wet material but the heatwave that March/April definitely helped. I moved into a smaller house that summer which has challenging to produce my paintings in, however I was fortunate enough to be awarded a residency at Sunny Bank Mills, Farsley, from October till December. Then being able to move straight into to Patrick Studios at East Street Arts in the new year was perfect.

My practice exists out of personal, first-hand experiences which I document through photography and reconstruct those memories through drawing and painting, and not being able to venture to new locations and try new things with those who are close to me meant I struggled to produce new ideas. However, in response to this I asked friends and family to photograph them in their home spaces and I found old holiday images, in my bank of photos, which all became the starting points for the new paintings in this upcoming exhibition. 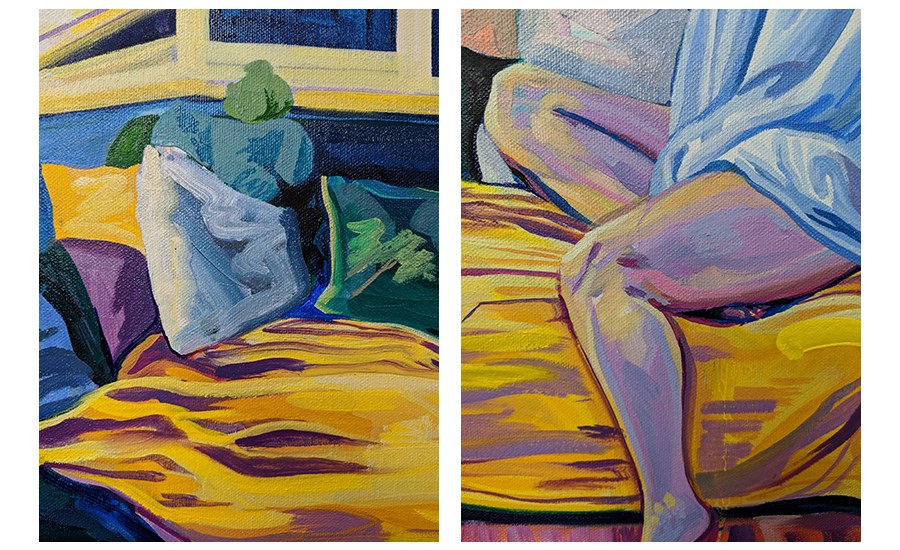 I have been reading ‘Tracy Emin/Edvard Munch: The Loneliness of the Soul’ to appreciate relatable and foundational emotions to do with relationships and self-love which their practices explored and are key themes underpinning my work. I have also been studying at the works in ‘Sorolla: The Masterworks’ to analyse his application of fairly thick paint while conveying light and contrast, draped over figures in summery Spanish settings, which I have been trying to bring into my works more recently.
Lone figures appear in all of these paintings. The piece ‘Leave it on the shelf’ (working title) depicts a friend alone at his dining room table occupied with his phone, a scenario that became too familiar and almost mind-numbing during the lockdowns. We view him at an awkward angle, and we bring about no response or acknowledgement from him. Another piece (to be titled) shows another friend’s reaction to the boredom through drinking and the aftermath of trying to have fun with his housemates. As another day went by without much routine, having expectations, or responsibilities. The vivid colour combinations and patterning’s enhance the suffocating repetitiveness felt within these rooms, along with the black windows not showing signs of activity or interest. A lot of my colour inspiration comes from studying the works of Pierre Bonnard, who also captured every day, domestic scenes and exaggerates them with complimentary colour pairings to indirectly express the sadder unknowing’s of his own and his family’s life.

The residency at Patrick Studios also includes mentoring where I was fortunate to be paired with professional Leeds based artist Phil Hopkins, organised by Leeds Arts University. We have built a strong relationship through many zoom calls, where he engaged with my works intentions, giving me constructive criticism and different imagery to look into, working on my writing for various applications and how improve my digital outreach and my overall online image. Soon he will be visiting my studio and we will be meeting for the first time, which will be very exciting as he will finally see my paintings in real life. The rest of my residency I will be completing these paintings and preparing to exhibit them in a solo exhibition in July at Patrick Studios, East Street Arts.

Her work is also included in the 2021 Leeds Summer Group Show.