After completing a foundation art degree in Loughborough, Rav Matharu studied BA (Hons) Fashion at Leeds Arts University and graduated in 2009 with a First Class Honours.

Rav was born in Leeds but decided to make the move to London after graduating, going on to work for House of Billiam as Head Designer, where he developed his skills and understanding of the fashion industry. During his 3 years at the company, he successfully saw his menswear designs go into stores such as Dover Street Market, Liberty London, 10 Corso Como, United Arrows, and Isetan amongst other great stores in Japan.

Now the CEO and Head designer of his own label Clothsurgeon and with a design interest in blurring the boundary between streetwear and high end men’s fashion, we caught up with Rav to ask him about his time at Leeds Arts University, his current work, and his future ambitions. 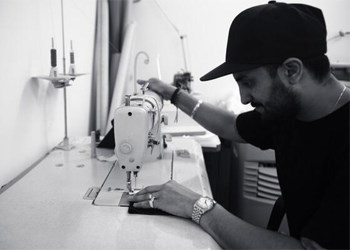 Can you tell us about your time studying at Leeds Arts University?

I really enjoyed the fact that everything was so accessible, I could wander into Printed Textiles and Surface Pattern Design and take inspiration, learn and use techniques to influence my research and final product. The course taught you a broad range of skills from pattern cutting to wholesale/retail business models, which has all been very valuable when running my own business.

Do you have any memories of specific projects you worked on that were significant for you?

The first garment that I made in my first year of the degree, this will always stand out, I spent all my holidays making this piece, perfecting it, and pushing my new found sewing skills. It was a leather bomber style jacket, with a digitally printed lining, the project was called Urban Decay. The piece is so relevant to what I do now.

What was behind your decision to move to London after graduating?

For me it was the only option. I got a taste for it whilst working on an internship at Jens Laugesen, the thinking is so much broader and for me it’s the fashion capital of the world, not just England. It was very hard initially as it’s so expensive to live in London; my vast sneaker collection was sold one by one. It was the best decision I made.

What is the highlight of your career to date?

My designs being stocked in some of the best stores in the world has been great, the likes of 10 Corso Como, DSM, United Arrows to names a few. I also have had some great people reach out to me in the Design world and respect what I do, which is always nice. The screen writer of the movie New Jack City, Barry Michael Cooper, reached out and had this to say about my New Jack City AW13 Collection,

"To see such an incredible, visionary, and fashion-forward collection, which is both hard enough for the hood, and haute enough for cafe society, is just brilliant. To see that same brilliant collection named after characters I created for a screenplay and film, is priceless. I say thank you for honoring my words and screenplay (and Mario's standout directing, and Wesley, Al Payne's, and Chris Rock's career-defining acting) in such an amazing collection." This was incredible and makes what I do so satisfying.

Can you give us an insight in a typical working day/week?

It usually starts with a black americano! Emails, post, fabric sourcing, putting together bespoke orders, more emails. As I’m pretty much a one man band at the moment I do all the running around too. My wife has come on board and has been a great help with the 'non-creative' side of the business.

Can you tell us more about what you are currently working on?

I’m currently working on a Bespoke POP UP that is going to be in Selfridges, so getting everything prepared for that, as well as bespoke and online orders. There are some other projects going on but I can’t reveal anything just yet!

What one piece of advice would you give to students studying BA (Hons) Fashion?

Take on as much information given by the tutors and get the most out of your degree, put in work out of hours and if you love and enjoy it, it won’t feel like work.