Upon graduating they produced the award winning 2011/2012 prospectus for the University. We caught up with them to find out what they have been up to since...

When did you set up Catalogue?

Tom: In the final year of our Graphic Design course. We decided that we would like to work together, and initially we had a debate on whether we were going to work full time or part time. When we got the prospectus brief from Leeds Arts University and realised we would have the initial work we needed to start our own studio.

Do you feel the skills that you learned at University have helped you in your professional work?

Tom: Ollie and I collaborated on a few projects in our final year and that was encouraged by our tutors who recognised that we had a similar ethos about design and similar ideas, and we worked well together. I suppose this encouraged us to keep working together once we graduated.
Ollie: During the course we had screen printing workshops and we were taught how to set work up for print, which was helpful for industry. One of my last tutorials with Fred Bates was really good, and I told him what Tom and I were planning and he was positive and said he could imagine us setting up our own studio, which gave me encouragement.

How did you find setting up your own company?

Tom: We did a course in Enterprise and Innovation at University and we have learned as we have gone on from experience.
Ollie: We’ve been careful to keep things above board. Having only two of us make things easier to manage as well.
Tom: It’s like anything- when you make the transition from being in education to working for yourself, the direction of the work has to change slightly. The University courses can be more of a personal investigation- you write your own briefs and make the work that you want to be doing. When you step out of that box, into client led work, you can get a big shock when a client turns around and says ‘No, I hate it,’ - you have to learn the hard way how to run your business.

Did you have a role model, or anyone that’s guided you?

Tom: Joe Gilmore (artist and tutor at Leeds Arts University) was a big inspiration whilst we were at University because he is a good example of someone who has gone out and started working for himself, and not compromised his work. He has a lot of integrity which we admire.
Ollie: He has never really worked in a big studio environment, which we like. We’d never like to work in a big studio.

Did you do any work experience whilst at University?

Ollie: Yes, in a small studio, with two guys with a similar set up to ours- they left university and worked in a big publishing company in Harrogate for six to seven years, and decided they would like to work for themselves and teamed up to share work. That’s exactly what Tom and I have done, and I really enjoyed working there. I’ve heard horror stories from friends about larger companies, and they can feel like part of a big machine, and that they are losing their creativity. That’s what I like about the way we work- it’s essentially what we were doing at University. When we get a brief we can re-write it ourselves and do what we like. We don’t have an overall boss limiting colours and fonts. We haven’t seen a massive transition between University and professional work, which is what a lot of our friends are experiencing.

Do you think that’s because you are good at building contacts and networking?

Tom: We do get a lot of work through word of mouth. We’ve been lucky in that respect, we have not had to actively go out looking for work- we’ve been too busy with our current projects which have come from contacts in Leeds.

Do you feel like you are part of a creative community in Leeds?

Tom: I would say we are. It seems like more and more people are starting to make things happen, get together more and start new projects and events.
Ollie: We have helped other artists and collectives with their projects. We’ve started to work with Joe Gilmore and Nous Vous and we hope to continue working on projects with them.

You recently got involved with Pick Me Up - the UK's first contemporary graphic art fair. Can you tell us about that?

Ollie: We went there with Nous Vous and Joe Gilmore. Nous Vous had an exhibition called Fresh Ones- where everything they made was a one off and handmade during the show. Nous Vous made two thirds of the show and asked other designers to display their work on a shelf as part of the exhibition. We printed a large wall piece two metres by one metre that Joe Gilmore had designed. It was a non repetitive pattern made of three tiles. It took about six hours to print, but it was really nice piece.

How is Printshop going?

Tom: Better than expected. When we moved into our first office we were daydreaming about buying a screen printing press. When we moved here it seemed a shame not to make use of the space available to us, so we invested in the equipment, to offer the service to clients. We do a lot of printing of t-shirts for bands, design companies and we can screen print all our own stuff. It’s great to be able to design in the office, then go outside and print the work- so many people don’t have that opportunity to do that. 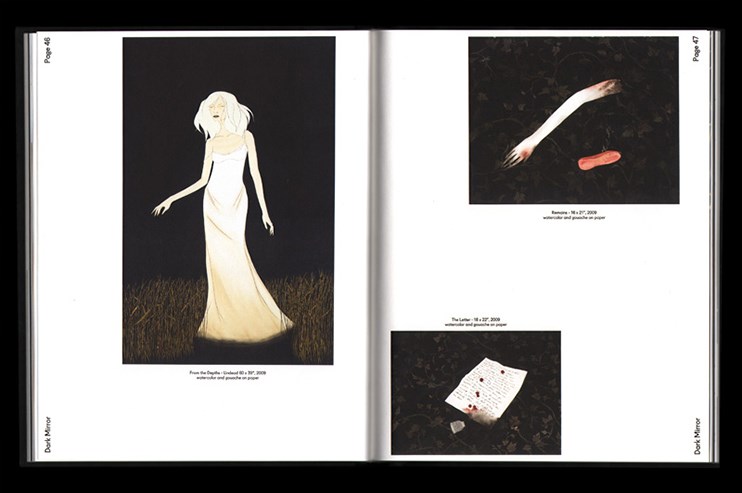 Do you think being in Leeds is important to Catalogue?

Ollie: Yes, it’s a relatively small place and everyone knows each other, and that works to your advantage.
Tom: We don’t feel like we need to go to networking events as we know a lot of people in Leeds. Networking tends to take place in an informal manner through friends and businesses we know.

Where do you think Catalogue fits into the graphic design market?

Tom: We’ve found a niche in the market, as we are one of the only people in Leeds doing clean, organised and modern design. Because we are small, there are only two of us; we can offer that service to smaller companies, with smaller budgets. The other companies that are offering similar designs are in bigger studios and need massive projects to support them.
Ollie: We are happy with what we are doing. We are also a lot more personable than bigger studios- there’s no secretary and communication is easy, you can talk directly to me or Tom.

Have you got a favourite project or client?

Tom: We’ve got some work coming up which should be really exciting.
Ollie: In the past, I liked the Patrick Oliver books and Vibrations magazine- we like working on books and magazines. We are also really proud of the Leeds Arts University Prospectus, it gave the studio a lot of exposure because the prospectus got plastered all over the design world- it’s been on blogs in many different countries. It’s recently won gold at the Heist awards, which is an incredible achievement, and great recognition for ourselves and the University.

Is that because of how you promoted it?

Ollie: We sent it to a few people and it just got passed around and escalated because it’s a nice piece of work.
Tom: We think it’s the best prospectus so far for the University, the reason it did so well in Graphic Design world is that it ticks all the boxes, the finishing, the aesthetic- it’s very ‘designed’ and considered.
Ollie: The University has helped us a lot with work and I think having the University on our portfolio helps- it boosts our brand and people can trust us to do good work. We like to work for independent companies, the University is a large company, but it’s still independent and not that corporate. It’s nice to work with someone that’s helped us out quite a lot and set us up to be where we are now.

Tom: We’d like to push forward the screen printing- setting up a clothing line independent from Catalogue. Lots of shops in Leeds and London want our t shirts, so we need to capitalise on that.

Would you like to set up your own shop?

Tom: Yes, but that would be quite far in the future, but I would never want to stop designing. At the moment it’s great because we can design the t-shirt and print it ourselves in house so we are doing everything we want in one process.

How are you finding running your own company?

Tom: We’re really enjoying it- we’ve kept our integrity and we are really happy with the work we produce- we’re not selling out which feels really good.
Ollie: Some months can be a little hard, but we can always scrape through. We’ve only been doing this for 9 months, hopefully in a couple of years we’ll still be working for the same type of people, but more frequently.

What advice would you offer to someone that’s still at University?

Ollie: Move into an office- don’t try and work from home; being in a professional environment and having to pay rent on a studio helps you to focus. We had a few jobs in the pipeline when we started, so we knew we would have work for the first few months.
Tom: Try and keep your integrity and do the work that you want to do. The biggest encouragement for me is that people have chosen to work with us because of our ‘house style’ -people recognise the skill in the work we do and how it can be applied to their projects.