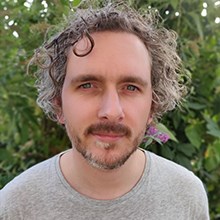 Sean is senior lecturer for the BA (Hons) Creative Writing. He is an award-winning prose and script writer.

He was awarded a Skillset Bursary from the British Film Council to study for a Masters in creative writing, from University of East Anglia. He received a Pathway to Excellent bursary for his PhD research, from University of Salford. Sean completed his PhD in 2019.

His thesis, Dismember the Past, is a creative and critical investigation of the life and work of Anthony Burgess, which is both a response and examination of Burgess’s own fictional literary biographies. Three Graves, Sean’s novel of Burgess’s life, will be published in September 2021, by Bluemoose Books. The novel was longlisted for the Bridport First Novel Award.

His theatre works have been performed at venues and festivals including the Hampstead Theatre, Contact Theatre, Arcola Theatre 24/7 Theatre Festival and Cambridge Junction. At the Edinburgh Fringe Festival, 2012, he was awarded a Three Weeks Editors’ Choice Award for Script in Hand, presented at Summerhall, which he both wrote and directed. He has been a recipient of a Peggy Ramsay Bursary for theatre writing.

Sean’s research and creative interests are in the space between creative and critical writing, music and text, and Bakhtin’s concept of dialogism. He is currently working on his second novel.

Sean is a member of NAWE and the Society of Authors.