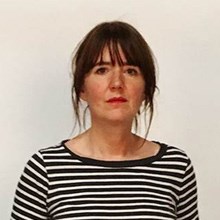 Sarah Eyre is the Course Leader of BA (Hons) Fashion Photography. Sarah has worked in commercial photography as a studio assistant and as a stylist. She has also worked in documentary film production as a researcher, and has directed and produced a number of short films that have been screened at the Cornerhouse, Manchester, BBC Big Screen and at a number of national and international film festivals.

More recently Sarah has worked as a Photography Lecturer and Course Leader at a variety of Further Education and Higher Education institutions whilst developing her photographic work for exhibition. Sarah’s practice and research interests use a range of moving and still lens-based approaches to explore the relationships between clothing, society and the fashioning of female identities. Recently she has exhibited work in China, Dean Clough Halifax, QUAD, Derby, as part of Format Photography Festival, Paper Gallery, Manchester, South Square Gallery, Bradford, Madlab and Cornerhouse, Manchester. Her work has been published in Source Magazine, Of the Afternoon, The Skinny and Hunger.tv.

Sarah has an honours degree in Photography, a Masters Degree in Non-Fiction Filmmaking, and a PGCE. She is currently undertaking a PhD by Practice.