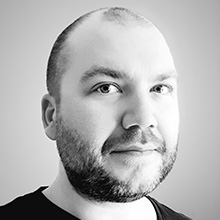 Robert Silkstone is a Senior Lecturer on the BA (Hons) Comic & Concept Art course. He is a concept designer specialising in Industrial Design. Before joining Leeds Arts University in August 2018, he was the final year leader and Lecturer in Product Design at the University of Huddersfield where he began teaching in 2009.

Alongside his teaching, Robert is a practicing freelance designer and design researcher. Before joining Leeds Arts University Robert has worked for over a decade in the product design and transport design industries producing concepts for a number of companies including Concept Group International, CAD CAM Automotive and Ford. Robert is the founder of Industrial North Design a British made watch company and design studio.

Robert is a Fellow of the Higher Education Academy and has a BA (Hons) Transport Design with First Class Honours from the University of Huddersfield.

Silkstone, R., Unver, E., Lee, J., and Bransby, G. (2015) A device suitable for protecting and/or allowing cleaning of a bike and/or vehicle component and method of use thereof. [Report].