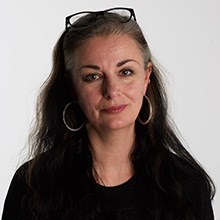 Paula studied under Professor Griselda Pollock at the University of Leeds for the MA in Feminist History, Theory, Criticism and Practice in the Visual Arts, an experience that had a profound and lasting impact on the direction and development of Paula’s practice and academic interests. She is currently undertaking a practice-led PhD at Middlesex University, and is a Fellow of The Higher Education Academy.

Working primarily with found furniture, Paula’s practice is sculptural, object based, and deals with concepts around feminism and the contemporary domestic. Paula has exhibited widely both nationally and internationally; with a back catalogue of solo shows, including most recently “ Transcendental Housework” at Stockport Art Gallery, and “Domestic Pirate” at Show Space, London. Paula peer reviews for several academic journals including MaMSIE, Studies in the Maternal, has presented at international conferences, and has been published in JourMS, an interdisciplinary journal focusing on the maternal in contemporary culture.

Chambers, P. (2017) ‘The Nightdress I Wore to Give Birth in: Performative Materialities and Maternal Intersubjectivities’, Performance Research: A Journal of the Performing Arts, 22 (4), pp. 18-27.

Chambers, P. (2020) Shoplifting in Woolworths: And other acts of material disobedience. The Civic Barnsley. 25 January – 7 March 2020.