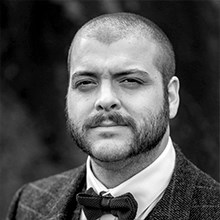 Mark Penman is a Senior Lecturer on the BA (Hons) Comic & Concept Art course. He is an illustrator and comic artist with a focus on narrative and storytelling. Before joining Leeds Arts University in August 2020 he was Programme Leader for the BA (Hons) Game Art degree at Futureworks Manchester.

Mark has been a feature of the UK independent comic scene for the last 12 years. His main project has been a series of self-published fantasy graphic novels titled Eimurian Tales where he has been able to focus on story led world building. As well as his self-published work Mark has operated as a freelance illustrator and produced art work for books, comics and games.

Mark has an MA Games Design and BA (Hons) Illustration from the University of Central Lancashire.