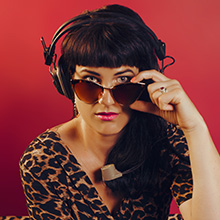 Georgia has been singing and teaching vocals for over fifteen years. Her BA Hons in Popular Music Studies was awarded by Bretton Hall of Leeds University and her PGCE in FE by Huddersfield.

Georgia joined indie pop band ‘The Research’ as bassist and vocalist in 2003 and signed a deal with EMI records. The band recorded and released two albums, the first recorded by John McIntyre in Chicago and the second by Per Sundig in Malmo Sweden. They released five singles in total. Georgia sang lead vocals on ‘Lonely Hearts Still Beat the Same,’ which reached no32 in the UK charts and was featured on TV series ‘Grey’s Anatomy.’ She toured with bands such as Maximo Park and The Cribs around Europe and the UK. And played festivals such as Leeds and Reading, SXSW in Austin Texas and Accelerator in Sweden.

After The Research Georgia started her solo project ‘The State of Georgia,’ and has released four studio albums. Gigs have included the medal ceremony stage for the Para Athletics at the Olympic park in London and a staff party for ‘King,’ in Barcelona. She performs at private weddings and corporate events.

Alongside singing professionally Georgia has been teaching vocals since 2004 starting at Stagecoach Theatre Schools. She has worked in many schools and Colleges with groups and one to one with singers. Georgia specialises in vocal technique, confidence for performing and harmony work.

As well as one to one work she has led many community groups such as the York City Gospel choir. Georgia currently runs ‘Singing Mums’ a community choir company based around Yorkshire. Georgia also writes music and performs for projects such as ‘Blood Memory Dance’ and female group ‘Hearts At War.’