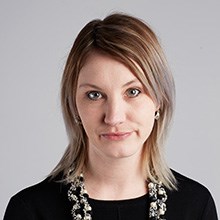 She was awarded her doctorate in the History of Art from the University of Glasgow (2012) and completed a postdoctoral fellowship in the Institute for Advanced Studies in the Humanities (IASH) at the University of Edinburgh (2013-2014). She has also served as a Visiting Lecturer in Forum for Critical Inquiry (FoCI) at Glasgow School of Art, and Research Fellow in Cultural Theory at the University of Huddersfield where she project-managed a two year collaborative exhibition programme at Huddersfield Art Gallery.

Catriona’s long-term research is primarily feminist-revisionary focusing on female participation in surrealism and how their legacies are manifest in contemporary practice. She is currently especially interested in why Leonora Carrington is providing such a productive site for feminist investigations into the marvellous. Catriona has also published extensively on the work of Dorothea Tanning and Kate Bernheimer, with book chapters on the novels and curatorial work of Chloe Aridjis and Heidi Sopinka forthcoming. The embodied storytelling of Samantha Sweeting, entomological sculptures of Tessa Farmer, conceptual objects of Lucy Skaer, and geological aesthetics of Ilana Halperin are ongoing interests.

Catriona is interested in supervising doctoral candidates in any of the following areas:

C. McAra, ‘Glowing Like Phosphorus: Dorothea Tanning and the Sedona Western’ in Journal of Surrealism and the Americas, volume 10, number 1 (2019).

C. McAra, 'The Malevolent Nostalgia of Tessa Farmer' in In Fairyland: The World of Tessa Farmer, edited by C. McAra (London: Strange Attractor, 2016).

C. McAra, ‘Photography’ in Folktales and Fairy Tales: Traditions and Texts From Around the World, edited by Anne E. Duggan and Donald Haase with Helen Callow, 776-778. (Wayne State University Press, 2016).

C. McAra, ‘A Natural History of The Dark Crystal: The Conceptual Design of Brian Froud’ in The Wider Worlds of Jim Henson: Essays on His Work and Legacy Beyond ‘The Muppet Show’ and ‘Sesame Street’, edited by Jennifer C. Garlen and Anissa M. Graham (Jefferson: McFarland, 2013), 101-115.