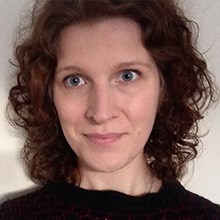 Dotty Kultys is an animation practitioner and Lecturer for the BA (Hons) Animation course at Leeds Arts University — she holds an MA in Animation from the University of the West of England and specialises in directing, visual storytelling and idea generation. With an additional degree in Acting, she has a strong background in theatre and an in-depth understanding of character performance, which she utilises in both her teaching of animation and her own creative practice.

As a freelance practitioner Dotty works primarily with 2D animation, combining hand-made and digital techniques, experimenting with seemingly incompatible styles and focusing on characters that often get overlooked. Her work has been shown internationally at film festivals such as Animafest Zagreb, New York Children’s Film Festival, Clermont-Ferrand Short Film Festival, Encounters Festival, Glasgow Short Film Festival or Anima Mundi, and Dotty has been a speaker at the 2017 FMX Conference in Stuttgart. Her short films are distributed in Europe by Little KMBO, and additionally used as teaching resources for the education charity Into Film and as moving image material at the new Royal Edinburgh Children’s Hospital. In the most recent years Dotty has worked on a variety of projects, ranging from short films, through corporate studio work, to commissioned projections and music videos.