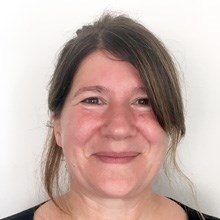 Debbie Ballin is a Senior Lecturer on BA (Hons) Filmmaking. She studied Cultural and Media Studies at the University of East London and MA’s in both Documentary Filmmaking and Creative Writing at Sheffield Hallam University. She has a PG Cert in Teaching and Learning in Higher Education and is a Fellow of the HEA. She has taught filmmaking at undergraduate and postgraduate level as well as running CPD courses for professional filmmakers and running filmmaking outreach programmes for young people. She was formerly the Course Leader on the BA Film and Media Production at Sheffield Hallam University.

Her practice-based research utilises a number of forms including documentary, audio, fiction and creative non-fiction. Her research weaves together oral history, archive and personal narratives to create compelling authentic stories. Themes include: protest, family history, inter-generational narratives, childhood, gender, memory, identity and the formation of political and philosophical beliefs in childhood and adolescence. She is interested in exploring the intersections between documentary, memoir, oral history and historical fiction and examining the way hybrid inter-disciplinary works can offer extended or novel understandings of lived historical experience.

Projects include: Under An Artificial Sun, Echoes of Protest, The Fence, Ogmore ’74, Me and My Hair, Teenland and Knitting A Love Song (BAFTA nominated) Her work has been broadcast in Europe, Canada and the US; exhibited internationally at film festivals, including BFI London Film Festival; Cannes Film Festival; Clermont Ferrand and the Cork Film Festival and exhibited in museums and galleries. Commissioners include the BBC, Channel 4, ITV, Screen Yorkshire and the UK Film Council.

She is currently researching the Wellcome Trust funded project, ‘Under an Artificial Sun: A Practice Based Exploration of the Effects of Childhood Hospitalisation at Stannington Sanatorium,’ which focuses on materials in the Stannington Children’s Sanatorium archive held at Northumberland Archives. This research investigates connections between this historic archive material and contemporary debates within child development. It utilises creative methodologies to uncover stories of the emotional legacy of hospitalisation within the archive and explores how hospitalisation may have shaped their lives in unexpected or seldom-discussed ways.

The Fence is Debbie Ballin’s first novel. It was developed on the MA Creative Writing at Sheffield Hallam University, completed in January 2018 and awarded a distinction. It investigates the inter-generational legacy of the Greenham Common protests of the 1980’s in fictional form. Other writing projects include the short memoir piece Ogmore ’74 and an interactive memoir Free Range.