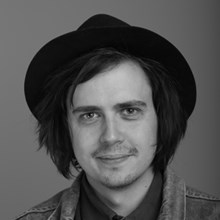 Ben Jones is a lecturer on the BA (Hons) Illustration course. He has worked as a freelance illustrator for ten years and is represented by Heart agency. Ben is known for his works across the design, publishing and most notably within editorial contexts.

Ben’s work is often historical in feeling but equally resonating, political and with comment. His illustrations are populated by slaves, prisoners, policemen, highway robbers, devils, dragons, tigers and men in suits with hats. His monthly column in BBC History Magazine seems like a natural pairing – unusual and almost unbelievable tales of mummified cats and umbrella thieves. Ben also has a regular commission to illustrate the covers of The Lancet medical journal, an example of Ben’s keen ability to interpret taxing briefs, seemingly difficult to get a visual handle on. Ben works regularly for the New York Times on sensitive social and political subject matters. The work he has created under tight deadlines for The New York Times has created a body of work attracting The New Yorker, The Guardian, The World Today, The Economist and the New Statesman.

Beyond editorial work Ben has also produced many book covers working for the French publisher Gallimard, as well as John Murray, Houghton Mifflin and Pushkin Press. He has written a penny dreadful novel ‘On The Way Down’ and a chapbook ‘The Fop’ both published by Rotland Press. His most challenging publishing commission to date has been an illustrated edition of The Clockwork Orange Published by The Folio Society. Ben successfully avoided the obvious pitfall of being influenced by the film. Instead he created a unique visual interpretation of Burgess’ vision. Ben found inspiration in the use of slang and formation of a language, like a collage from existing elements. He looked at illustration and graphic design that was being generated in Eastern Europe in the 1960s. Ben also found out that Burgess was from Manchester and his experience of the city influenced the novel, something in turn Ben chose to explore. The use of a bowler hat on the cover is one nod to Kubrick’s role in making the novel so well known. Overall these reference points and sources of research are lightly worn in the final artwork, but the process has resulted in a fitting and highly considered execution.