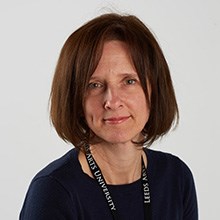 April is an artist and Senior Lecturer on the BA (Hons) Fine Art course and contributes to the MA Creative Practice. She graduated with an MA in painting from the RCA in 1994, and has extensive experience of lecturing in higher education. April has a PGCE in post compulsory education and is a Fellow of the Higher Education Academy. She is currently External Examiner for the University of Chester.

April’s practice is primarily in painting, exploring the interplay between the illusion of real space, the materiality of the painted surface and the regulating structure the support. Her work investigates both typologies of space and subjective, perceptual experience.