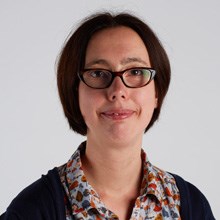 Amelia Crouch is a lecturer on the BA (Hons) Fine Art programme.

She works with media including text, moving image, print and installation. Her artwork is underpinned by an interest in the relational and mutable nature of meaning. Outcomes range from simple acts of wordplay - such as semiotically inspired text animations or artists' books - to more elaborate, performative videos. In the latter she explores bodily or spatial codes of behaviour, such as shaking hands or walking in the landscape. Here the contingencies of meaning and interpretation are used to question self or social identity as constructs which hold different significance at different historical moments or in different contexts.

Before entering teaching she pursued roles as a project manager and arts administrator for organisations including The Northern Art Prize, Project Space Leeds and Light Night, Leeds. She co-founded Leeds Art Walk and has worked as part of the artist-led group Black Dogs, giving her a range of experience spanning the artist-led, civic galleries and public realm contexts. Additionally she is a contributor to a-n magazine and works as an Arts Council assessor.

Crouch, A. and Cooper, D. (2019) The cul-de-sac in the forest: the supermodernity of Center Parcs. In: Practising place: creative and critical reflections on place. Arts Editions North.